Our concern is for the aboriginal inhabitants of the islands and the waters around the islands. If Japan decides to develop these islands, it would have serious consequences for island flora and fauna. Japan's mistreatment of dolphins is vividly evident in Taiji, Japan where hundreds of dolphins are ruthlessly slaughtered every year. The dolphins of Diaoyu should not be threatened by continued Japanese occupation of islands they violently stole from China in 1895.

Although China continues to have issues with allowing the captivity of dolphins and the consumption of shark fin soup, Sea Shepherd has been encouraged by the decision of the Chinese government to ban shark fins at state functions. Sea Shepherd sees China as willing to make concessions in the interests of marine conservation and they have done so, whereas Japan has been intractable on the same issues. 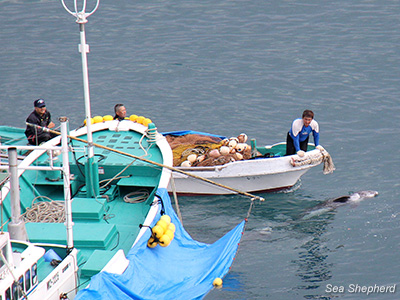 Body of a Risso's dolphin being transferred in Taiji, Japan
Photo: Sea Shepherd