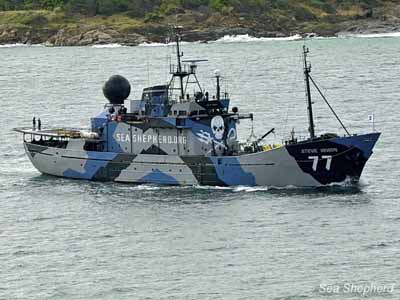 Chakravarty is a young sailor from Maharashtra, India and this will be his second Antarctic Whale Defense Campaign with Sea Shepherd.  "The aim is to bring an end to whaling. We want to permanently end illegal whaling in the Southern Ocean Whale Sanctuary, which is protected by an international moratorium," he said.

Captain of the SSS Bob Barker, Captain Peter Hammarstedt stated, "The plan is for our fleet to meet the whaling fleet in the North Pacific off Japan. We are planning to take the battle pretty much up to Japan itself. We are keeping the location and identity of our new vessel, the SSS Sam Simon, a secret in the hope that the first time the whalers see the Sam, is when she comes into view on the slipway of the factory processing ship, the Nisshin Maru, effectively shutting down their illegal whaling operations."

Currently docked in Marina del Rey, California on its very first trip to the mainland U.S., the fast scout vessel, the SSS Brigitte Bardot, will depart on November 11 and quickly meet up with the rest of the Sea Shepherd fleet.

Hammarstedt also went on to say "it is expected Sea Shepherd Founder and President Captain Paul Watson will appear in command of one of the vessels when the action begins." Captain Watson has been in an undisclosed location since July 22when he forfeited his bail and departed house arrest in Germany to avoid being extradited on bogus charges to Costa Rica and Japan.

Australian Director Jeff Hansen stated, "This is our strongest fleet to date, with four ships and more than 100 international crew representing 23 nations to defend the Southern Ocean Whale Sanctuary. Operation Zero Tolerance will be Sea Shepherd's best-equipped and most effective campaign to date. This is a defining moment in Sea Shepherd's history; we have no tolerance for whale poachers. Our objective this year is 100%. We are going to try and intercept them as quickly as possible, and try to make this the first year they get zero kills."