This December, Sea Shepherd Conservation Society will embark on its fourth expedition to the remote southern waters off the coast of Antarctica, with the launch of its latest Antarctic whale defense campaign: Operation Migaloo.  Sea Shepherd has drawn a line in the sand when it comes to the humpback whale featured on its logo and will not stand by while the Japanese whalers target nearly 1000 whales for certain death, including 50 endangered humpback whales and 10 endangered fin whales in the Southern Oceans.

The campaign is named in honor of Migaloo, an endangered albino humpback who has become a national icon in Australia. This year, the sights of the ruthless Japanese harpooners are set square on the endangered humpbacks, meaning that Migaloo and all of his family are under imminent threat of death at the hands of Japanese pirate whalers.

Founder and President of Sea Shepherd, Captain Paul Watson, will soon embark with an international crew on the ship, the Robert Hunter, to enforce international conservation law and prevent the illegal slaughter of endangered species by an outlaw whaling fleet.  As the relentless Japanese whalers seek to hunt down and kill Migaloo and his family, Sea Shepherd will be hunting the whalers with the firm objective of intervention against their illegal activities.

"I did not establish the Sea Shepherd Conservation Society as a protest organization," said Captain Watson. "I have not gone to sea over all these years to simply bear witness to the atrocities that whalers continue to inflict upon the most gentle and intelligent beings in the seas. We are sea cops-operating 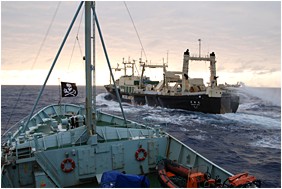 legally under the guidelines of the United Nation's World Charter for Nature, which allow for the enforcement of international conservation law by non-governmental organizations in international jurisdictions."

For more than three decades, Sea Shepherd has been at the forefront of the whale wars, defending the gentle giants wherever and whenever they can. Sea Shepherd has tackled overwhelming odds with insufficient resources, won many victories, and saved the lives of thousands of whales. In 2005-2006, Sea Shepherd harried the Japanese fleet enough to ensure they went home 83 whales short of their self-appointed quota. In 2006-2007, the Japanese whalers fell over 500 whales short of their illegal quota. Sea Shepherd will return this year with a ship to match the speed of the Japanese fleet, new equipment for intervention, and an international crew of dedicated volunteers willing to spend their holidays at the bottom of the earth on a historic voyage to save whales.

Sea Shepherd is on a quest to protect the greatest treasure of the seas-the great whales.  "We are obsessed with stopping the Cetacean Death Star, that viciously cruel killing machine otherwise known as the Nisshin Maru, and her ruthless fleet of hunter/killer boats armed with their explosive deadly blunt harpoons," said Captain Watson.  "Because if we kill the whales, the sharks, the seals, and the sea turtles, we will destroy the very foundation of life in the oceans-and in so doing, we will destroy humankind."