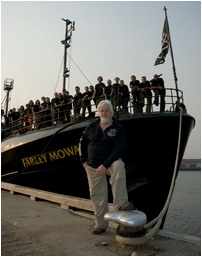 Flagship Farley Mowat Heading to the Antarctic
to Defend Whales

This Saturday, the 23rd of December [Australian EST(Eastern Summer Time)], the international volunteer crew of the Sea Shepherd flagship Farley Mowat departed from Melbourne. The departure of the ship launches our campaign to intercept Japanese whaling operations in the Antarctic Whale Sanctuary: Operation Leviathan.

The Farley Mowat is expected to arrive in the whaling area during the first week in January where the flagship will rendezvous with the organization's newly acquired second ship, code-named Leviathan. The two ships with over 60 international volunteer crewmembers, a helicopter, and numerous smaller vessels will confront the Japanese whalers on the high seas. The volunteers represent thirteen nations with crewmembers from Australia, Bermuda, Brazil, Canada, Chile, France, Germany, Hungary, Great Britain, Netherlands, New Zealand, South Africa, and the United States. 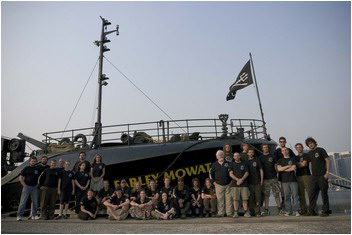 The Japanese whaling fleet is determined to slaughter more than 1,000 whales in the Antarctic Whale Sanctuary - where it is illegal to kill whales. Japan has doubled its illegal quota of piked (Minke) whales to just over a thousand, and will be targeting endangered fin whales, and for the first time since the early eighties, 50 endangered humpback whales.

"Sea Shepherd is the only organization in the world willing to go to the Antarctic to intercept the Japanese whaling fleet and shut them down," said President and Founder of Sea Shepherd Captain Paul Watson. "This is an international effort to uphold international law against a pirate whaling operation. We are not going south to hang banners or to film and photograph whales dying. We intend to defend the whales."

Australians have come out in force to support Sea Shepherd in the past several months. During our stay in Australia, over 30,000 people have visited the Farley Mowat in both Fremantle and Melbourne. The crew has given numerous tours of the ship and participated at events around the country over the past several months. Thousands of new Oz supporters have joined the Society. Among them, advertising guru John Singleton and Bluetongue Brewery are supporting the campaign through the launch of their website www.whalesafebeer.com. The citizens of Melbourne have been very generous to Sea Shepherd by contributing tons of food, tools, supplies, and donations that are so vital to the campaign. Australian media coverage has been unprecedented as the momentum of the anti-whaling movement is reaching a critical mass. There is no doubt but that Australians love the whales.

A crowd of supporters were on hand to send off the crew of the Farley Mowat. The conservation vessel flew the flag of Fremantle, Western Australia, when the ship departed. 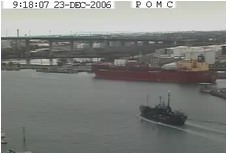 The flag had been given to the ship by Fremantle Mayor Peter Tagliaferri with the request that we fly it in the Southern Oceans.

The ship also flew the Bluetongue beer flag in honor of Bluetongue's sponsorship of the expedition. And, of course, the ship flew both the Australian and the Aboriginal flag as a courtesy to a people who are dedicated to shutting down the criminal operations of the Japanese whaling fleet.