Sea Shepherd Conservation Society has embarked on their most ambitious campaign to date - a campaign to raise $3 million to purchase a second vessel that will join their flagship, Farley Mowat, in their upcoming Whale Defense Campaign this December in Antarctica. The campaign, called Operation Leviathan, will raise funds to purchase a ship that can match the speed of the Japanese whaling fleet which is determined to slaughter more than 1,000 whales in the Antarctic Whale Sanctuary.

Sea Shepherd is the only organization that is capable of intervening against illegal Japanese whaling activities in the Antarctic Whale Sanctuary.  Their unique, no-nonsense, direct-action strategy has an almost 30-year history of successes in whale protection.

"I established Sea Shepherd for the specific purpose of upholding the laws that protect whales and marine wildlife," said Captain Paul Watson, Founder and President of Sea Shepherd. Unlike other organizations that bear witness and document the slaughter, Sea Shepherd directly intervenes to uphold international conservation law in accordance with the principles of the United Nations World Charter for Nature.

Saving whales is what Sea Shepherd does best and what they are most noted for. Their approach has been simple and straightforward and they have shut down outlaw whaling activities in Norway, Iceland, Spain, and the former Soviet Union. They continue to be the most aggressive, most successful, and only organization dedicated to direct-action and intervention to protect the great leviathans.

"The key to success is to have the ship with the speed to shut down the whalers," continued Captain Watson. "We have found that ship and we have just over two more months to raise the funds needed to depart for the waters off the coast of Antarctica where we can intercept and shut down the pirate whalers from Japan."

The campaign will fund the new vessel and operations to bring two ships, a helicopter and more than 50 international volunteer crewmembers to meet the Japanese whalers on the high seas. The Society has already raised almost half the funds needed. 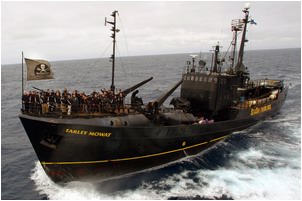 The Farley Mowat and her crew in Antarctica 2005-6

"The outpouring of support from caring individuals around the world has been both amazing and inspiring," said Captain Watson.  "We have found that there is much compassion around the world for protecting and defending the gentle giants of the oceans."

"We will be going south in December," said Dutch Captain Alex Cornelissen of the Farley Mowat. "The Japanese intend to kill over a 1,000 whales including endangered humpback and fin whales in violation of international conservation law.  We are up against a billion dollar industry and we can shut them down for only $3 million dollars."

Sea Shepherd is more determined than ever to defend these whales which deserve to live their lives wild and free. They believe that the heritage of future generations should include the magnificent and intelligent whales and that the delicately balanced ecosystems that we enjoy must be preserved for future generations.