Sea Shepherd Conservation Society is joining forces with Francois Hugo and his seal-saving organization, Seal Alert-SA. Sea Shepherd has already begun to finance the operations of Seal Alert in South Africa for their work protecting the beleaguered Cape fur seals.  Seal Alert is the only organization in southern Africa that not only advocates for seals, but campaigns, protests, introduces protection legislation, and also, rescues seals every day.

Denied access to most large islands by the government, these seals (also called South African fur seals) have been forced to breed and pup on smaller islands that, in most cases, consist of small low lying rocks which frequently become completely or partially awash. This causes almost a 100% mortality rate each year via the washing away and drowning of newborn pups. Seal Alert rescues hundreds of these abandoned seal pups each year. Another factor devastating the seal populations is the sealers in Namibia who are slaughtering every pup still alive at the beginning of sealing season on the mainland. Additionally, the commercial fishing industry shoots seals and entangles/drowns thousands, while also causing the starvation of half the population annually due to overfishing.

Born and raised in Cape Town (the Cape of Storms), Hugo spent his early years as a full-time crayfish fisherman, salvage diver, and Navy diver, spending more time underwater than on land. He then journeyed into the world of corporate intelligence, and conducted undercover operations in many African countries involving crime syndicates, mafia, drug smuggling, child trafficking, and illegal diamond dealing. The entanglement and dying of one baby seal drew his attention, and since that day, he and his wife, Nelda, have dedicated their lives to the saving of the seal species. Now 44, Hugo heads Seal Alert, and using his acquired investigational skills, he is untangling the web of deceit that surrounds this species, while living his motto, "My day starts with the objective of saving the life of a seal - everyday."

Seal Alert has set up a rehabilitation center in Hout Bay, not far from Cape Town, where Hugo has and continues to rehabilitate scores of rescued seal pups and successfully returns them to the sea. 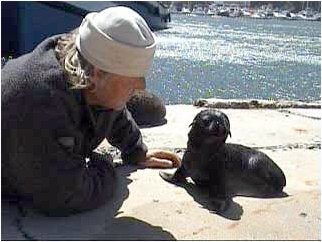 Outspoken, controversial, stubborn, and passionate are words that come to mind when Francois Hugo's name is mentioned in Southern Africa. He has been called the "Seal Whisperer" because of his intuitive interaction and unique connection with the seals. As Hugo says, "My work is a labor of love born out of a deep genuine desire to protect and conserve these magnificent animals."