Four vessels plus the supply vessel Oriental Bluebird were located on the Sixty Degree South line at 2415 Hours GMT. The Factory ship Nisshin Maru is about 400 miles to the northwest of the position of the rest of the fleet.

When located, the Oriental Bluebird had the catcher ship Kyo Maru alongside transferring supplies. The Yushin Maru has also been visually identified by name.

Upon spotting Sea Shepherd, the crews of both ships began running along the decks releasing the lines to get underway. The Sea Shepherd ship Steve Irwin is in full visual pursuit of the entire Japanese whaling fleet minus the Nisshin Maru.

"We have them on the run," said Captain Paul Watson. "We will hound these poachers for as long as we can and when we catch up with them we will disable their equipment and do everything physically possible short of inflicting injury on the crew in order to stop their illegal activities."

The Steve Irwin has a helicopter in the air and a fast boat approaching the whalers with the main vessel only seven miles to the rear of the fleet and closing. The small boat has a crew of four including three Australian and one American. 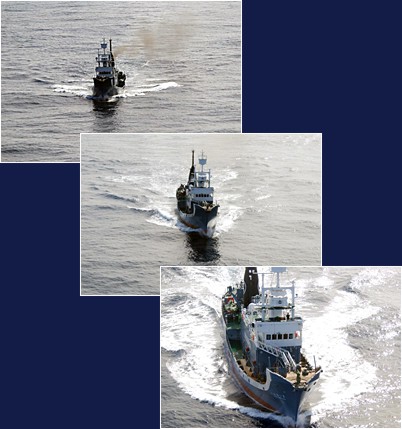