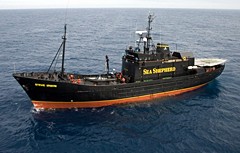 Captain Paul Watson has invited Australia's Environment Minister Peter Garrett to visit the Steve Irwin while the conservation ship is in Hobart for refueling.

"I think we need to work with the Australian government to oppose illegal whaling in the Southern Ocean Whale Sanctuary," said Captain Paul Watson. "Mr. Garrett may disagree with our tactics but the bottom line is we are on the same side, we both represent the concerns of the Australian people and Sea Shepherd is a non-violent organization with no criminal record. I think a meeting and friendly discussion would be a positive contribution towards marine conservation efforts."

The recent expulsion of the Japanese harpoon vessel Yushin Maru #2 from Indonesia was accomplished due to the efforts of Green Party Senator Bob Brown, former Australian Environment Minister Ian Campbell, and Fremantle Mayor Peter Tagliaferri. Environment Minister Peter Garrett did not get involved citing that it was an issue for Indonesia to decide, although Indonesian officials specifically requested advice from Australia.

"We would like to include Mr. Garrett in the campaign to end whaling in the Southern Oceans," said Captain Watson. "There is no need for him to continue to be a spectator to these events. We are pressuring Japan out of the Southern Ocean Whale Sanctuary, we have cost them their profits and we have lowered their kill figures for three years running. We are going to win this battle and we would very much like Mr. Garrett to be standing with us when this victory is finally achieved."

The Sea Shepherd ship Steve Irwin will arrive in Hobart, Tasmania on Saturday, January 17th around mid-day. The ship will refuel, change some crew, take on provisions, and will immediately return to the Southern Ocean to resume the pursuit of the Japanese whaling fleet.