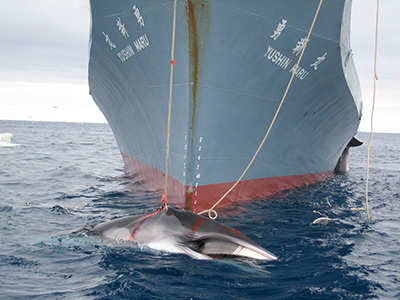 This invitation echoes the call on Monday documented in news reports by Australia’s Environment spokesman Greg Hunt stating he wrote to Prime Minister Julia Gillard proposing that Australia send a Customs vessel to monitor the impending face-off in the Southern Ocean. Citing a resolution passed by the International Maritime Organization in 2010 compelling whaling vessels to ensure the safety of protesters during demonstrations, rallies or confrontations on the high seas, reports state that Australia has “warned Japanese whaling vessels it won't tolerate protesters being threatened.”

Australia states it remains “resolutely opposed” to commercial whaling, including so-called "scientific" whaling, and has expressed concern about hunting activities in the Southern Ocean Whale Sanctuary.

Sea Shepherd wishes to thank Australia for its support. Until now warnings by the nations noted herein have been directed primarily at Sea Shepherd, while simple facts in the case have being ignored, specifically:

The only reason Sea Shepherd is intervening is because the Japanese whaling fleet is killing protected and endangered species in an internationally established whale sanctuary in violation of a global moratorium on commercial whaling. Sea Shepherd is simply trying to uphold international conservation law where diplomacy has failed and where there has been a failure of enforcement by the signatory nations of the International Whaling Commission.

Sea Shepherd invites Australia to send a ship to monitor the situation and to keep the peace. Similarly, if New Zealand, the Netherlands or the U.S. are truly concerned about safety at sea, they should send a representative onboard the Sea Shepherd ships and the Japanese vessels to observe the situation for themselves. 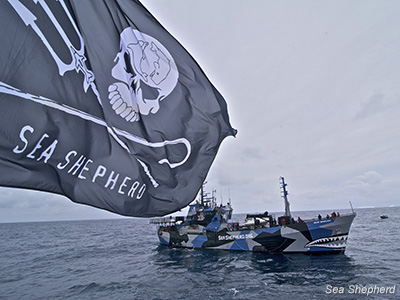 Sea Shepherd Australia wishes to make it clear that Sea Shepherd does not wish nor intends to do anything illegal or violent. We never have and we never intend to.

The governments of the United States, Australia, New Zealand, and the Netherlands claim to oppose whaling in the Southern Ocean Whale Sanctuary — a sanctuary they themselves voted into existence — but none of these governments is actively protecting the sanctuary. Australia is taking Japan to court but most likely Japan will ignore any ruling from the international court just as they have ignored the Australian ruling. Where is the enforcement of the integrity of this internationally designated sanctuary? Where are the sanctions against Japan for blatantly ignoring international conservation law?

“The least these governments can do is to observe the situation first-hand to get an objective understanding of the situation instead of simply condemning Sea Shepherd and ignoring the violence and the crimes of the Japanese whaling fleet,” said Sea Shepherd founder and President Captain Paul Watson.