The pilot whales are discarded from the same cliff face that is also used to dispose of local household and industrial waste. "The Faroese claim that the grind is a beautiful, religious rite of passage. But at the same time, they discard the bodies of these beautiful creatures into a trash pit that also contains tractor and generator parts amongst other industrial waste,” said Ager. 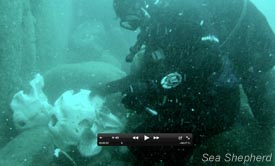 A pilot whale skull collected from the graveyard was brought onboard the Brigitte Bardot for further analysis but was subsequently replaced back to sea. "It would have been great to keep the skull to show other Europeans the victims of the grind. However, it would be illegal to bring the skull into the European Union because pilot whales are listed as a threatened species under the Bern Convention. Ironically, the same reason that we can't bring this skull ashore for outreach purposes, is the same reason the pilot whale hunt shouldn't be occurring in the first place," said Swedish First Officer Peter Hammarstedt.

Sea Shepherd will continue its patrols of the Danish Faeroe Islands in search of pilot whales during Operation Ferocious Isles, a campaign designed to defend and protect pilot whales. However, a Faroese naval vessel is currently tailing the conservation group’s vessel. "The pilot whales are our clients. And like good shepherds, we will continue to stand by to defend them," said Captain Fraser Hall of Canada.

The Brigitte Bardot spent the evening of July 20 docked in Vestmanna in Streymoy giving tours of the vessel to local children. By late morning, the vessel began its strategic patrols of Streymoy and Vaga.