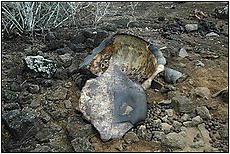 Eight magnificent and endangered Galapagos tortoises were brutally slaughtered last week on the island of Isabela in the Galapagos Islands. Rangers found the shells of the animals near the fishing village of Puerto Villamil. The tortoises apparently were killed for their meat, although the killings could be revenge slayings. The fishermen have killed tortoises in the past in retaliation for quota restrictions on lobster and sea cucumbers.

The killings followed the announcement by UNESCO (United Nations Educational, Scientific and Cultural Organization) that the Galapagos is now designated as a World Heritage Site that is endangered.

These eight tortoises, three of which were nearly a century old, were cruelly tormented then killed.  These ignorant poachers are consuming tortoise meat because they believe it will slow the aging process.

In a meeting in Quito on July 5th, Sea Shepherd Founder and President Captain Paul Watson and Sea Shepherd Galapagos Director Sean O'Hearn-Gimenez reviewed the facts of the case with Colonel Teresa Carransa, the head of the Federal Environmental Police. O'Hearn-Giminez will be working with the agency to insure that the investigation moves forward and will assist in any way possible.

Last year, the world mourned the passing of Harriet, a 175-year-old Galapagos tortoise that died in June 23rd, 2006, in an Australian zoo. "Yet here we have eight of these incredible creatures slaughtered illegally. The world should be outraged at the ignorance and brutality of this crime. We need to see these killers apprehended and given severe penalties," said Captain Watson.

Presently, the Sea Shepherd ship Farley Mowat is in the Galapagos and last week seized and confiscated a 30-mile hooked and baited longline. "It is very strange," said Captain Watson, "that these longlines are prohibited in the marine reserve, and yet every time our ship and crew arrives in the waters of Galapagos we find them immediately."

"The problems are many, but the solutions are simple," said O'Hearn-Giminez. "We simply need to see the Special Law of the Galapagos enforced. Dogs and cats should be removed from the islands; all illegal residents should be deported back to the mainland; and cars and trucks should be banned and replaced with electric cars. Additionally, institutional corruption needs to be investigated and enforcement operations placed into the hands of the Environmental Police and the National Park. These agencies should implement a system for monitoring and intercepting poaching operations. This can be done, we only need the political will to protect these unique islands, and if we have that, will we will find a way."