Departing from the Netherlands, the Whales Forever shadowed the Norwegian coast as she headed north to the Lofoten Islands to confront Norwegian whalers.

It was a high profile campaign with numerous journalists on board the Whales Forever to cover the actions of Captain Paul Watson and his international crew.

The Whales Forever did not confront any whalers. Instead, the Norwegian government sent a large warship, the Andenes, to intercept and seize the Sea Shepherd ship, and to arrest Captain Watson and bring him in handcuffs and leg irons to Oslo.

The only problem was that Captain Watson had not committed a crime nor was he charged with one. Norway had no authority to board the Whales Forever as long as Captain Watson remained outside the twelve-mile limit.

The ramming was followed up with the deployment of depth charges and numerous warning shots fired from the deck gun of the Andenes. After a five-hundred mile chase, the unarmed Whales Forever found refuge in the Shetland Islands, and the Norwegian Navy was embarrassed. Most importantly, the confrontation focused international attention on Norway's illegal slaughter of whales.

The Andenes was left with a long rip in her hull and had to be drydocked for repairs. An unarmed Sea Shepherd ship had defended itself against an armed Naval vessel and won the day.

Tens years later, this summer, the Andenes was in Oslo along with numerous NATO ships for the anti-terrorism program called Blue Game 04.

One of crew on the Whales Forever in 1994 was a man we affectionately called the "Crazy Norwegian." Being Norwegian and working against illegal Norwegian whaling means keeping a low profile so we always felt it best to always refer to him as the "Crazy."
The Crazy Norwegian and his girlfriend Rannveig thundered up to the Andenes on a loud motorcycle and that got the attention of the sailors. Their jaws dropped when they saw that the Crazy Norwegian was wearing his Sea Shepherd crew jacket.

Hopping off his bike, the Crazy Norwegian walked over to the gangway of the Andenes and asked for permission to board.

"You are welcome to board, sir, the ship is open to the public."

The Crazy Norwegian asked for the commander because he wanted to speak with someone in charge.

When an officer came to speak to him, the Crazy Norwegian said that he wanted to inspect the ship and he expected a free lunch in the mess. "It's the least you can do since you damaged our ship ten years ago."

The officer replied, "Yes, we did ram you up there in the Lofotens."

The Crazy Norwegian said, "Got you. The official position is that we rammed you, remember?"

The officer's face reddened. He had not been there but had forgotten what the official response had been.

"Well, er, I meant when you rammed us, of course."

Needless to say, the officer politely refused the request for lunch and an inspection, citing security procedures.

So the Crazy Norwegian inspected the deck and the hull and told the young sailors what really happened between the Andenes and the Whales Forever, a decade before.

And his girlfriend took some pictures to post for the members of Sea Shepherd. 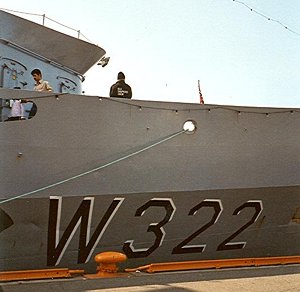 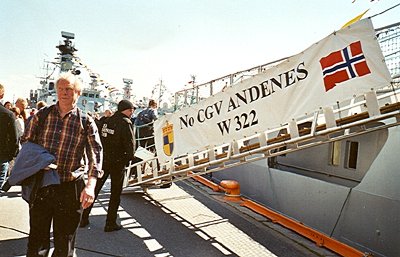 The Crazy Norwegian stands guard at the gangway of the Andenes