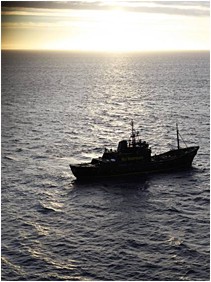 There are less than 10 days left in the Japanese whaling season, and Sea Shepherd Conservation Society's ship, the Steve Irwin, has reached the limit of its fuel reserves.

"We have no alternative but to retreat from the Southern Ocean," said Captain Paul Watson, Founder and President of Sea Shepherd. "We have just enough fuel to make it back to port. We've done everything we can do down here for this season, and it has been an enormous success. I believe we have saved the lives of over 500 whales."

Since departing Melbourne on February 14, the Steve Irwin has covered over 6,000 nautical miles chasing the Japanese fleet from as far west as 96 Degrees East to as far east as 136 Degrees East. The majority of the chase took place inside the Australian Antarctic Territorial waters between 62 Degrees South and 65 Degrees South. In total, the Steve Irwin pursued the Japanese whaling fleet for over 3,500 nautical miles. The Nisshin Maru was tailed and harassed for over 1,800 of those miles.

Sea Shepherd can reliably report that no whales were killed during the 17-day period of February 23 to March 10. Added to the 3 weeks that Japanese whalers were prevented from killing whales in January, that brings it to a total of 5½ weeks-or nearly half the whaling season-in which no whales were killed.

"Our success will be reflected in the final kill figures," said 1st Officer Peter Brown. "There is no doubt in my mind that we have made a significant impact on their profits this season, and I am assuming they are not very happy."

In response to the International Whaling Commission's condemnation of Sea Shepherd's interventions in the Southern Ocean, Captain Watson said, "While they were in London talking about whales, we were down here actually protecting the whales. So they can condemn us until the cows come home, but I think we served our clients, the whales, as best we could, and every whale's life saved has been a victory for us. We feel satisfied for the lives we have saved, and we feel remorse for the lives we were unable to save. The IWC members should feel ashamed for allowing Japan's criminal poaching activities to continue."

Sea Shepherd will work to secure a second ship to return to the Southern Ocean next season along with the Steve Irwin, although it is hoping that Japan will choose instead to withdraw from continued illegal whaling in the Southern Ocean.

"We don't enjoy this conflict with the Japanese," said Captain Paul Watson. "We do this to defend the whales, not to offend Japan, but if we are offending Japan by defending the whales, then that is the way it must be."