Following in the wake of the Nisshin Maru are the Japanese vessels Shonan Maru 2, Yushin Maru 1 and Yushin Maru 2. There is no sign of the Yushin Maru 3.

Six ships, two from Sea Shepherd and four vessels from the Japanese fleet, are heading at full speed northeastwardly.

"Not a single whale has died since the Bob Barker intercepted the fleet at 0100 Hours on February 6th. It is now the third day that the whaling fleet has been unable to kill a whale. We intend to turn these three whaling free days into three whaling free weeks," said Captain Paul Watson. "I am confident that once again we will severely cut their kill quotas and we will once again negate their profits."

The Steve Irwin and the Bob Barker have enough fuel to pursue the whaling fleet for another month.

"It does not matter where they go, east or west along the Antarctic Coast," said Steve Irwin 1st Officer Locky MacLean. "We intend to stick to their rear like glue and we will not allow a single whale to be loaded onto the decks of that foul floating abattoir."

There are 41 crew (29 men and 12 women) on board the Steve Irwin from Australia, Bermuda, Brazil, Canada, Estonia, France, Japan, Hungary, the Netherlands, New Zealand, Poland, South Africa, Sweden, the United Kingdom, and the United States (15 nationalities).

There are 30 (6 women and 24 men) crew on board the Bob Barker from Australia, New Zealand, United States, Sweden, United Kingdom, and South Africa (6 nationalities). 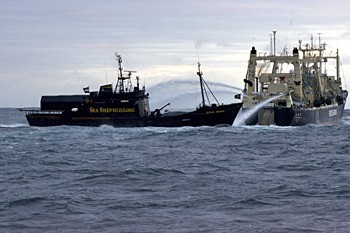 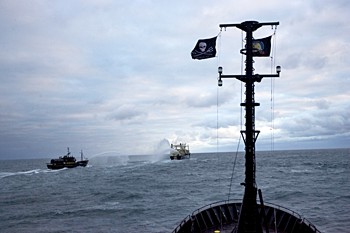 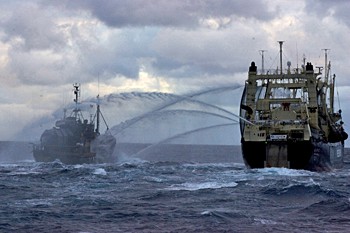