Joining the Bob Barker this morning was the fast patrol vessel Ady Gil out of New Zealand and skippered by Pete Bethune. The Bob Barker and the Ady Gil are chasing the Nisshin Maru away from the Whale Sanctuary and all whaling operations have been halted.

The Japanese strategy was to keep the Steve Irwin away from the fleet by dedicating a faster ship to tail the Sea Shepherd crew. Using aerial surveillance the Japanese located the Steve Irwin on December 9th at the 200-mile limit off the Australian coast. They relayed that information to the waiting Shonan Maru No. 2. Six hours later, the faster Japanese vessel intercepted the Steve Irwin making it impossible for the Sea Shepherd crew to locate the main body of the Japanese fleet. Attempts to lose the tail were unsuccessful, forcing Captain Watson to return to Tasmania where he refueled and then departed undercover of a storm on the evening of December 31st.

Despite the Japanese sending multiple surveillance planes up all day on January 1st, 2010, the Steve Irwin slipped past the Japanese security vessel Yushin Maru undetected. The Shonan Maru No. 2 had returned to the fleet to refuel and was replaced at the 200-mile limit by the Yushin Maru.

The objective of Sea Shepherd’s three-ship campaign is to bankrupt the illegal Japanese whaling fleet and to sink them economically.

“This year, I have three ships, four small boats, a jet ski, a helicopter, 77 crew, and a bagful of aggravation for the Japanese whale poachers,” said Captain Paul Watson. “We intend to make life miserable for the whale killers over the next month and a half.”

Included in the crew is the Animal Planet crew filming the third season of the hit television series “Whale Wars.” 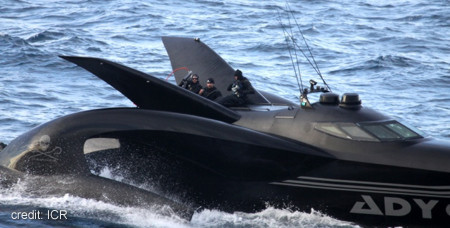