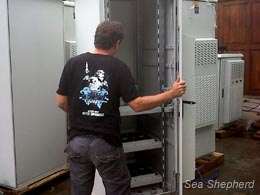 All but one platform has been constructed to house the AIS repeater base stations. Certainly not an easy task considering that we have chosen the most remote and inaccessible locations for our project. Marcel Wensveen, project manager of the AIS network, has repeatedly cursed me for sending him up the steepest, volcanic hills in Galapagos. Lucky for us, at times, we were assisted by the national park’s helicopter to transport building materials to the sites.

The equipment required to build our sites is quite extensive. We have AIS repeater hardware from Japan, solar panels and batteries from China, antenna masts and equipment housing from Colombia, and even more parts from Australia and the United States. The national park facilities are becoming increasingly cramped and our office looks like a mad scientist’s workshop.

Marcel recently finished the installation of the El Junco site on San Cristobal Island. This is now the first functional AIS site, and we can already start seeing boats moving within the range of this AIS repeater. Several park ranger boats have already been equipped with the AIS receivers and more will follow in the coming weeks.

Once the last of the missing equipment has arrived, we will start getting the repeater sites assembled and they will be transported to the various island locations. Not long after that the network control centers will be installed and the system can go online bringing us a huge step forward in protecting the Galapagos Marine Reserve.

This project has been made possible thanks to the generous support from the Dutch Postcode Lottery. 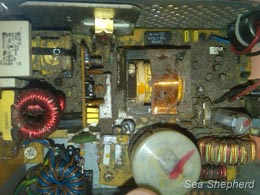 Tsunami salt water damage to a radio at the
police stationAll our installed radio systems are still up and running. The police in the Galapagos and the agricultural inspection service, Agro Calidad, rely mostly on these radio systems installed by Sea Shepherd. We continue to supply maintenance for these systems, as well as material exchange, old batteries for instance. Costs are low in general but the benefits for the users are excellent.

While installing the AIS repeater station on San Cristobal Island, we improved the existing radio repeater from the Galapagos National Park Service. New solar panels as well as new solar regulators will ensure this repeater’s improved functionality for years to come.

We did have some setbacks due to the tsunami that hit the Galapagos, originating from the deadly earthquake that hit Japan in early April. For logistical reasons, all of the authorities control centers are built on the coast, which doesn’t bode well during a tsunami. The Galapagos Islands were hit by a two-meter high wave that forced its way into buildings, flooding the police station and the Agro Calidad office, causing severe saltwater damage.

Wensveen managed to repair some of the radios damaged by the tsunami, but about half of them underwent too much irreversible damage from the salt. As soon as funds permit us to, we will replace the damaged equipment.

We first set out on this project in order to prosecute environmental infractions, but we soon learned that the existing judicial system in the Galapagos was incapable of handling cases on environmental crimes in a manner consistent with the legal status of this national park, marine reserve, and world natural heritage site.

Our legal advisor, Ecuadorian attorney Dr. Hugo Echeverria, has proven to be a huge asset to the Galapagos staff and instrumental in several developments in Galapagos law enforcement.

Now our legal project focuses on much more, including:

1) Help establish specialization within the judicial system - Galapagos now has their very first ever public prosecutor who specializes in environmental crimes. We are also still advocating for a court that focuses solely on cases involving nature.

2) Providing environmental legal knowledge to judges and prosecutors, firstly in the Galapagos but also throughout Ecuador - Fresh off the press and in the Galapagos office, we now have the first ever “Manual on the application of criminal environmental law as a tool for the protection of the natural areas in Galapagos.” Hugo wrote this manual in cooperation with the Ministry of Justice (Projusticia), the academic sector and conservation NGOs. The manual will be handed out to judges and other public servants of the judicial system in Ecuador. Presentations of this historic reference source will be held in the coming month in the Galapagos, Quito, and Guayaquil with the expected presence of the Minister of Justice.

4) Monitoring of cases - Thanks to the police K-9 dog[1] unit and the AIS system, more cases involving an environmental infraction are being prosecuted. Sea Shepherd Galapagos is in close contact with the police on all cases that involve the environment. In order to put criminal environmental law on the public agenda, we’ve held meetings with the highest bodies in the Ecuadorian judicial system, the Ministries of Justice, Internal Affairs, Natural Heritage, Environment and the Judiciary Council. We have also been communicating with the offices of the Attorney General and the Supreme Court by keeping them up-to-date on our initiatives.

Not long ago, the application of criminal environmental law in the Galapagos was very poor, but we have found many allies who agree with the need to improve the existing judicial system, an essential tool in our fight to preserve this UNESCO World Heritage Site.

TO BE CONTINUED TOMORROW…