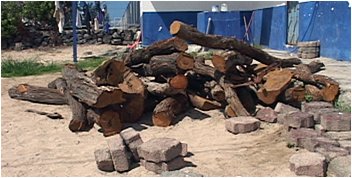 The historic first-ever visit to the Galapagos Islands by District Attorney for Guayaquil and Galapagos Dr. Jorge Blum occurred after a covert 45-day investigation by Sea Shepherd Galapagos (SSG) into political corruption called Operation Mangrove. SSG learned in late March that the Galapagos National Park (GNP) had filed a complaint against the Mayor of Isabela Pablo Gordillo Gil for ordering municipal employees to destroy the protected mangroves and the surrounding wetlands ecosystem in an area known as El Embarcadero in South Isabela. After investigating, convinced that the complaint was valid and had serious, far-reaching implications, SSG strongly urged Dr. Blum and other government representatives to make a special trip to Isabela to launch an official investigation, which could result in criminal charges against the mayor. 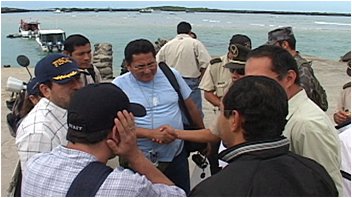 The district attorney agreed to personally take on this case, and the presence of the district attorney himself in the archipelago sets a precedence that invites the possibility of strong sanctions for environmental crimes committed against the Galapagos Islands. Dr. Blum was welcomed in Baltra Airport by Director of the GNP Raquel Molina and Director of Operations for SSG Sean O'Hearn-Gimenez. Sea Shepherd is calling its investigation Operation Mangrove.

The district attorney was accompanied by a team consisting of the Assistant District Attorney for Environmental Crimes Dr. Monica Rivera and forensic specialists in biology, chemistry, and criminalistics as well as two SSG lawyers who had been assisting the GNP legal staff as part of Operation Mangrove. Given the fact that the Galapagos Islands is in a declared state of danger by the Ecuadorian government and that the wetlands of South Isabela were protected by the RAMSAR International Convention, Dr. Gyna Solis, legal advisor for the Latin American Association of Human Rights (ALDHU), was requested to attend as observer by the Vice President of the Republic of Ecuador Dr. Lenin Moreno and the Ministry of Interior. In addition, the Chief Commander of the Ecuadorian National Police General Bolivar Cisneros ordered police protection for this important environmental investigation. 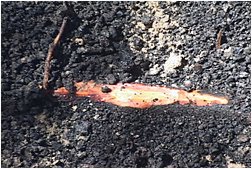 Policemen excavate the site where volcanic debris and sand was used to bury the ecosystem;
Mangroves are revealed under the refill

During his stay in the Galapagos, from May 31st to June 3rd, the District Attorney completed an intensive agenda which included:

i) The review of pertinent documentation in relation to the criminal charges filed by the Galapagos National Park against the mayor of Isabela, Pablo Gordillo Gil, for the illegal destruction of mangroves in the El Embarcadero one of Villamil Port and the subsequent refilling of this area with volcanic debris and white sand.
ii) The taking of samples by forensic specialists in biology, chemistry, and criminalistics in order to determine the extent of the damages in which they also established a crime scene of over 500 square meters.
iii) The verification of evidence and statements by various people involved in this case.

On April 10th, the Galapagos Islands were declared in a state of high risk by the President of the Republic of Ecuador Rafael Correa, and as a result, it was considered of national priority to protect the conservation and environmental management of this fragile ecosystem in an effort to improve overall administration in the Galapagos. "The Galapagos Islands are endangered, and therefore, the destruction of protected mangroves and its wetlands ecosystem by publicly elected officials are serious crimes which, if they go unpunished, will just open the door for a continued barrage of similar environmental crimes," states O'Hearn-Gimenez.

According to earlier statements made by Mayor Gordillo, he was merely helping to develop the island for people of Isabela since it was part of a project to improve the existing dock infrastructure for tourists visiting the islands. Juan Chavez, director of the GNP in Isabela, says that it is critical to ensure development of urban projects which are sustainable for future generations and that the preservation of natural resources ultimately benefits the people economically since it represents the main tourist attraction to the islands. "It is embarrassing that mangrove destruction is occurring in a UNESCO World Heritage Site," stated Chavez. 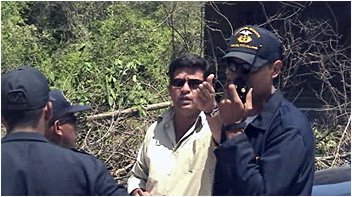 An angry Mayor Gordillo asking to shut off camera.

Director Chavez further informed the district attorney of the serious ecological crimes committed and of the important role in which the wetlands ecosystem plays in the conservation of the biodiversity of these islands, and he also added that the damage done is irreversible. In addition, O'Hearn-Gimenez stated, "The construction of a new dock does not justify the destruction of a protected forest. It makes no sense to construct a dock in the name of ecotourism development and as part of that same construction destroy an ecosystem vital for the survival of ecotourism." 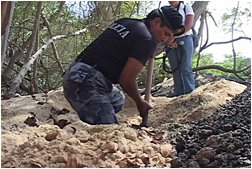 On Sunday, June 3rd, 2007, the district attorney and his team of forensic specialists concluded their visit. The forensic specialists have up to 15 days to present their findings and lab results, and based on this report Sea Shepherd expects the district attorney to file an appropriate and just ruling. Sea Shepherd Galapagos team and lawyers will continue to support the Government of Ecuador in the protection of its Natural Resources.  As soon as results from the investigation are available, Sea Shepherd will release them to the public.