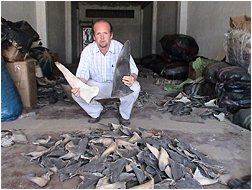 Sea Shepherd Conservation Society is waiting for more details, but the move is political. Sea Shepherd has cost the shark mafia in Ecuador more than one million dollars in the last month.

This arrest follows Sea Shepherd's successful intervention against numerous illegal activities over the last two months, including the confiscation and destruction of tens of thousands of illegal shark fins and nearly one hundred thousand illegally caught sea cucumbers. In addition, Sea Shepherd has confiscated two illegal longlines in the Galapagos waters.

Less than a month ago, Sea Shepherd signed an agreement with the Ecuadorian National Police to work in cooperation to shut down poaching and smuggling operations.

On August 1, the Sea Shepherd ship Farley Mowat was ordered out of the National Park by the Ecuadorian Navy. Sea Shepherd Founder and President Captain Paul Watson and his crew are presently just outside of Ecuadorian waters and the Galapagos National Park Marine Reserve. O'Hearn-Gimenez is being detained in the headquarters of the Immigration Police. He is accompanied by Sea Shepherd lawyers and supporters.

Sea Shepherd will post more news as it becomes available.


Please send a letter to the President of Ecuador to protest this situation.