Their statement that all the catches were caught on the 14th sounded much too convenient, so we asked to examine the fish for juveniles. We were refused. I then put the bow of the Steve Irwin onto the cage so we could look into the cage from the bow to examine it further.

Suddenly, the Maltese vessel Rosaria Tuna rammed the Steve Irwin on the aft port side and slid alongside the port rail, as a fisherman tried to violently gaff Sea Shepherd crewmembers with a long, sharp-hooked pole.

The Steve Irwin crew retaliated with 8 liters of rotten butter forcing the fishing vessel to retreat and to stand off.

At 1530 hours, the two fishing vessels circled their cages defensively and the Sea Shepherd ship Steve Irwin stood off to notify ICCAT (International Commission for the Conservation of Atlantic Tuna) of possible violations. They did not respond.

The Jean Charcot, the ICCAT inspection vessel will not venture south of 33 Degrees 40 Minutes North.

With two fishing vessels containing angry Italian crews, there were risks involved with getting into the water to assess the bluefin catch. But if the catch was illegal, Sea Shepherd divers knew they must cut the nets and free the bluefin tuna.

Sometimes it is necessary to do what needs to be done despite the risks. The risk of losing the bluefin tuna as a species is far more important than the risks to our own lives and freedom.

And so we decided to free the tuna.

At 1600 hours, a five-person dive crew entered one of two cages being towed by the Italian fishing vessel Cesare Rustico.

As the Steve Irwin held off the Cesare Rustico and the support ship Rosaria Tuna, the Sea Shepherd crew dove into the net to identify the size, age, and quantity of the bluefin tuna within. Once it was clearly established that the cage was overstocked and that a high percentage were juveniles, Sea Shepherd divers freed the 700-800 tuna. 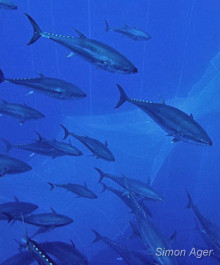 A large percentage of the tuna were juveniles and from the position of the cages and the fact that the entire Mediterranean bluefin tuna fishery closed at midnight on June 14th, Sea Shepherd is convinced that this catch was caught after June 14 and therefore Sea Shepherd holds the position that this operation by these two vessels was illegal.*

A Sea Shepherd cameraman filmed the release of the fish from the centre of the cage and swimmers confirmed that all 700-800 tuna inside the enclosure were freed.

“They shot out of that net like racehorses,” said Canadian cameraman Simon Ager.

After freeing the bluefin tuna, the Steve Irwin headed north and out of the waters claimed by Libya. The Maltese media reported that Libya had dispatched warships to pursue the Steve Irwin.

There are claims in the Maltese press that a bluefin tuna fisherman was injured by our actions. No one on the Steve Irwin, in the helicopter, or in the Delta saw any incident where a fisherman was injured. We saw one man dive into the water from the side of the cage. Then, we saw him get up and give us the rude Italian arm signal. Another fisherman slashed at the crew with a hook on the end of a long pole, and one of the vessels rammed us in the port stern area.

Given the very bad weather conditions in the zone north of Tripoli until the closure of the legal fishing season on June 14th, it is impossible that this catch was taken during the legal season. The tuna were caught post-closure, during a period of very calm weather that has predominated over the area since the 15th.

The Steve Irwin passed the Khandeel 2 (one of the vessels on the BCD document read over the VHF radio) on the 13th at 1230 at 33*36 / 13*55, less than 20 miles from where we encountered the cages towed by Cesare Rustico and Rosario Tuna on the 17th, and it was not fishing. The weather was rough.

Given the location of the capture, and the location of the tow vessel, it is impossible the catch was made 3 days ago. Heading towards Malta with an average 25 miles per day, the vessel and cage would have been much further north (the vessel was in very calm weather sitting still waiting a second vessel). 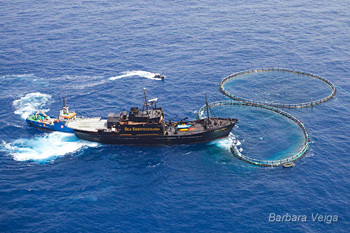 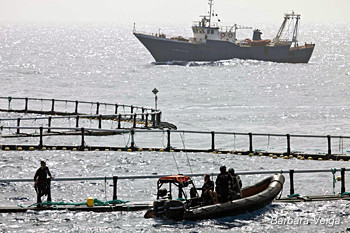 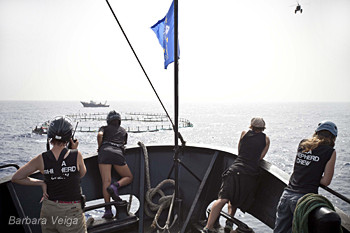 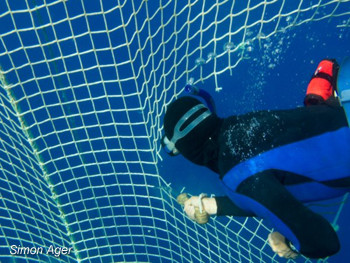 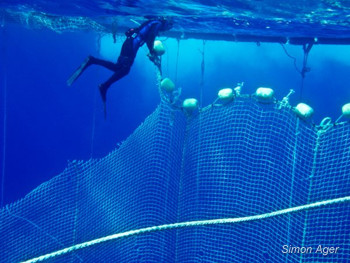