The Steve Irwin Gets a ‘Razzle Dazzle’ Paint Job 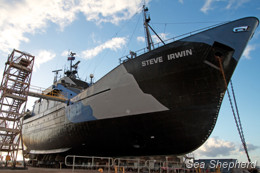 The Steve Irwin sits in the dry dock.
Photo: Joshua TrenterTwo years since the Steve Irwin’s last haul-out in Brisbane, the former black beauty is currently resting in drydock in Henderson, West Australia receiving a much-needed refit in preparation for her upcoming mission.

Slipping the ship is no easy task. The docking plan must be submitted to the shipyard, whose engineers build a cradle or a series of blocks that the ship rests on once out of water. Then, ever so slowly, once the ship has been steered into the slipway and centered, she is raised on a platform using powerful wire winches, like a giant elevator. The ship definitely looks much larger once out of the water!

Thanks to the very hard work of our volunteer deck crew, whilst moored alongside the drydock last week, the Steve Irwin was successfully repainted World War I style “dazzle” camouflage, to assist in cooling the ship in warmer climes, and to confuse and intimidate our adversaries, the illegal poachers and plunderers of the oceans. Bosun James Brook said, “The crew is happy with the Steve’s new look,  the ship has cooled down a lot with the grey decks and everyone is proud of all the hard work they have put in before the Med campaign.”

During the haul-out, the Steve Irwin’s hull is being pressure washed and sand-blasted to remove old paint and growth, the propeller is being repaired, after suffering some ice damage in the Antarctic waters during Operation No Compromise, and zinc anodes are being replaced to guard the steel hull against corrosion. All underwater valves are being checked and serviced, as well as the bow thruster and all the sea chests (water intakes).

The engineers have been hard at work, repairing generators and main engines and ensuring all systems are "go" for the long journey ahead. The hull itself is being coated with primer and anti-fouling paint to ensure a smooth finish and a fuel-efficient voyage.

The crew of the Steve Irwin has less than one month since their return from the Southern Ocean to prepare the ship for her next mission in the Mediterranean Sea, where Sea Shepherd will defend the highly threatened bluefin tuna and intervene in illegal fishing operations.

On behalf of the entire Sea Shepherd crew, thank you for supporting our missions to protect the world's oceans. In order for us to accomplish our mission, our ships must be in good, safe condition, which takes both time and money. We thank you for your ongoing support in making these essential repairs possible.

The Bob Barker Awaits Her Turn for Repairs

The Bob Barker arrived in port of Yamba, in the Clarence River, New South Wales, on Saturday, April 9, skippered by Captain Ian Brokenshire, of Hobart. In preparation for the shark defense campaign in Palau later this year, the Bob Barker will undergo much-needed repairs at Hardwoods Slipway near MacLean, New South Wales.

The Bob Barker's crew has been hard at work getting the vessel ready for the high tide on April 16th and 17th, as this will be the opportune time for the ship to make it up the Clarence River to the drydock for her repairs the following week.

First Mate Vincent Hayes said, "She'll be right, mate!" as he spent the day Monday surveying the Clarence River up towards the shipyard with both depth sounder and lead-line from the commercial wharf where the Bob Barker now sits. He found good depth all the way which, with help from the 1.6 meter tide on the 16th, should ensure a safe shift into drydock with reasonable clearance under the keel.

We would like to thank the community of Yamba for supporting Sea Shepherd, as well as Captain Simon McEvoy, Yamba’s Harbor Master, for his assistance during our visit.

The crew is looking forward to spending the next few weeks getting the ship ready for the upcoming campaign in the warm waters off Palau.

Gojira Visits the Galapagos en Route to the Panama Canal 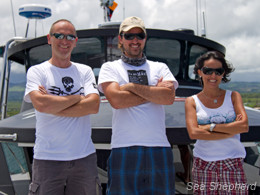 Having spent two weeks at sea, the crew of the Gojira was eager to stretch their legs on land. Sea Shepherd Galapagos was very happy to be able to welcome the Gojira. Public interest in the fast interceptor vessel was tremendous, resulting in the volunteer crew of the Gojira as well as the Galapagos office staffers, to spend two full days alone conducting ship tours.

Our support base in the Galapagos is growing certainly in part due to the success of the Whale Wars television series. Having the vessel that was so prominently involved in this year’s campaign stop in the Galapagos will surely further stimulate our growth in the islands.

Automatic Identification System (AIS) project manager Marcel Wensveen donated our “Ron the Shark” flag to the Gojira under the condition that it would be proudly flown in when the vessel makes it to the Med this summer. Hopefully, we will see our Shark Awareness education pack continue to build awareness when distributed in the ports of call en route to and in Europe.

Sea Shepherd Galapagos is in the midst of the AIS project and in close cooperation with the Ecuadorian Navy and the Galapagos National Park Service. Due to the tight itinerary of the Gojira, a visit to one of the construction sites proved to be impossible.

On the evening of Sunday, April 10th, the Gojira set sail for Panama.

Our supporters are part of our life-saving conservation work and responsible for making what we do possible. We welcome your donations to help make our three-vessel fleet ready for the challenging campaigns ahead.

Watch this video, which illustrates what a big job this is!