"There is a dotted line on the chart that clearly defines these waters as being under the economic authority of the government of Australia," said Captain Paul Watson, Founder and President of Sea Shepherd. "There are some in the Australian government who argue that Japan does not recognize Australian authority and therefore nothing can be done. Australians should rejoice that representatives of their government in 1942 did not give in so easily when the Japanese refused to recognize the sovereignty of Australia. If they had, there would be Japanese whaling bases in Australia today."

"It was a relatively simple matter to find them. We just had to put ourselves in their shoes. They expected us to begin our search at the Eastern side of the Ross Sea where they normally begin their whaling. We therefore made every indication that we were heading towards the Eastern side, to an area to the Southeast of New Zealand. Instead, we began our search at the Western side, to the Southwest of Tasmania. We even posted a false report of flying over and filming McQuarie Island to lead them astray, and it worked. At the end of the day, our hunch paid off, and they were exactly where we thought they would be -- in an area they were not supposed to be in. They are whaling in heavy ice conditions. Perhaps in an effort to keep themselves hidden, they have been operating in areas between the ice pack and heavy ice drifts. We are now here to stop them." 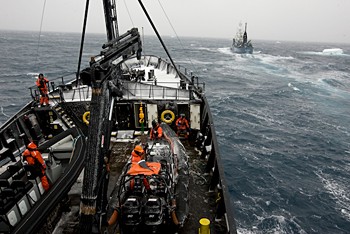