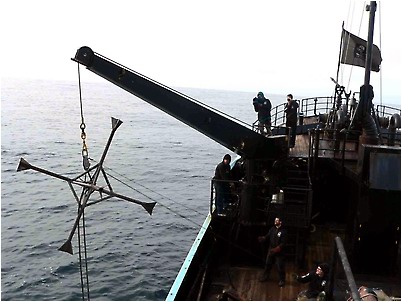 Position: On the Tail of the Grand Banks of Newfoundland

The seas were calm with slight swells when the Farley Mowat arrived this morning on the Tail of the Grand Banks of Newfoundland.

This is one of the two areas of the Grand Banks that lies outside the Canadian 200-mile Economic Zone. The other area is called the Nose of the Banks. 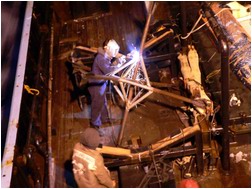 The Farley Mowat stopped upon sighting a large pod of dolphins and seven fin whales. "I'll take this as a sign that this is where we should deploy," said Adrian Haley of Wisconsin, the leader of the welding team that constructed the net rippers.

Each net ripper weighs 1,500 lbs and has 18 net-ripping blades on each device.

"These devices are experimental," said Captain Paul Watson. "We plan to deploy heavier steel girder and concrete ‘hedgehogs' at a future date. What we deployed today are smaller devices to see if they will be effective. We call these ‘aquatic caltrops.' I believe they will be effective. The devices are designed to anchor themselves into the bottom with two cables with two anchors. When a bottom trawl runs over the device, the objective is to rip open the net." 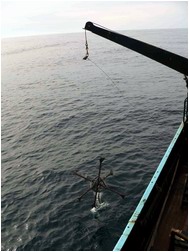 "This is our first step in a program to spike the Banks and the Flemish Cap," said 1st Officer Alex Cornelissen of the Netherlands.

The Farley Mowat also deployed another experimental device of a different design. This device sets up a curtain of grappling hooks to snag a net. The net will then drag the large object lying on the bottom with the objective of ripping the net.

The crew were hoping to deploy some devices in the path of a dragger but no drag trawlers were seen on the Banks or on radar.

"These Banks once crawled with draggers working the bottom like maggots eating a corpse," said Captain Watson. "Now that the fish have been diminished, the number of scavenger draggers has dwindled. But they still come to pick the bones of the Tail of the Banks, and when they do, we hope they find our little gifts."

Sea Shepherd encourages anyone who cares about the survival of the cod and the other diminished species of fish on the Banks to make their own "hedgehogs" and "aquatic caltrops" and deploy them at will. The Banks need to be littered with thousands of net-ripping devices to discourage the ecocidal activities of the industrial draggers.

The 16 net rippers have been deployed over a selected section of the Tail of the Banks. The Farley Mowat has recorded the GPS positions of the devices and these positions have been encrypted so as not to be made available to the fishing industry.

This is the 2nd Sea Shepherd Conservation Society campaign to the Tail of the Banks. In 1993, the Sea Shepherd ship Cleveland Amory chased Cuban and Spanish draggers off the Tail. The Canadian government arrested and charged Captain Paul Watson with Criminal Mischief for saving fish. In a trial by jury in Newfoundland in 1995, Captain Watson was acquitted of the Mischief charges.

The Farley Mowat departed on this voyage on February 21st, 2005. The entire campaign has taken two months and managed to complete the required objectives.

"We knew we did not have the power to stop the slaughter of seals," said Captain Watson. "It was our one ship and a few helicopters from two other organizations against almost a hundred vessels in the Gulf and only our one ship against more than three hundred sealing vessels on the Front. In addition, the sealers had the forceful back-up of a number of Ice-breakers and aircraft. Our objective was to make the seal slaughter an international media event. That objective was achieved better than we had hoped. An added bonus is that our ship did not sink and the Canadian government was unsuccessful in seizing it. We suffered no injuries, weathered the storms, survived the ice, and completed our voyage with the successful deployment of the net rippers. We are satisfied that we have done the best job we could with the resources at our disposal"

Sea Shepherd Conservation Society will be returning to the Grand Banks to deploy more net rippers in the future.