Our campaign against Planktos Inc. is over. The controversial plan to dump hundreds of tons of iron ore dust into the ocean in a bizarre scheme to seed plankton blooms has been abandoned by the Planktos corporation of California.

This is a victory against a corporate carbon trading scheme that had no scientific credibility.

This is from the February 13th, 2008 edition of the New York Times" (http://dotearth.blogs.nytimes.com/2008/02/13/commercial-ocean-fertilization-project-
halted/index.html?ref=technology): 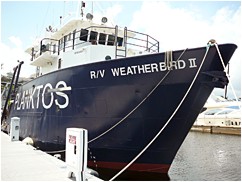 "Planktos, the California company trying to turn a profit by fertilizing the ocean with iron dust, pulled the plug on planned field tests on Wednesday, citing a lack of funds. At the company's Web site, planktos.com, a simple notice blamed the shutdown on a "highly effective disinformation campaign waged by anti-offset crusaders."

The business plan had been to sell "carbon offset" credits earned by triggering blooms of phytoplankton that, in theory, would absorb a predictable amount of the climate-warming gas carbon dioxide through photosynthesis and then sink to the seabed. The credits would be sold to companies or individuals trying to compensate for unavoidable emissions of carbon dioxide (from driving, flying, and the like).

Plankton blooms happen naturally when dust containing iron settles on ocean waters where a lack of iron otherwise prevents plankton from thriving. Huge blooms have resulted after dust from the Sahara Desert blows over the Atlantic, for example. But efforts to replicate the process artificially have met with strong opposition from environmental groups. The Sea Shepherd Conservation Society, which for years has confronted, and sometimes rammed, whaling and fishing vessels had threatened to block a fertilization effort by Planktos last summer near the Galapagos Islands, forcing it to change plans.

A number of marine and climate scientists have also opposed commercial fertilization efforts, for various reasons. In a "joint policy statement" published in the journal Science last month, a group of researchers from around the world said trade in carbon credits earned this way was premature "unless research provides the scientific foundation to evaluate risks and benefits."

The Planktos vessel Weatherbird II has been stuck in port on the Portuguese island of Madeira after months of revised plans and failed efforts to attract more investors. Financial troubles had been mounting for months. On Wednesday, the company said it had called back the vessel and its crew.

The Planktos statement said:
"Management has also radically downsized the company's staffing while the board of directors has formed a new committee to explore all options currently available. Options include a possible re-launch of planned marine operations, pending additional financing or new partnerships, as well as the possible pursuit of other promising business opportunities in the environmental sphere.
The board of directors continues to believe in the urgent ecological necessity of its ocean restoration plans and the scientific speciousness of objections voiced to date. However, ideological hostility to and misrepresentations of this work will continue to stymie progress until the true gravity of our climatic and ocean crises is more widely understood."

The Sea Shepherd Position:
The Sea Shepherd Conservation Society opposed the iron ore dust dumping scheme because it was condemned by the Environmental Protection Agency of the United States and was in fact a violation of United States and International regulations on the dumping of materials at sea. The scheme was also opposed by the Galapagos National Park, the Charles Darwin Foundation and the Ministry of the Environment of Ecuador.

Sea Shepherd did not make any judgment on the scientific merits, if any, of the scheme. We acted because the dumping was a violation of Ecuadorian, American and International law.

In August of 2007, Sea Shepherd blocked the plan in the Galapagos. In November 2007, Sea Shepherd confronted the Planktos vessel in Bermuda forcing it to move onto Madeira.
The Sea Shepherd Conservation Society would like to thank Planktos for acknowledging our opposition as the reason for the abandonment of this scheme.

Will dumping iron ore dust into the sea stimulate plankton blooms? Will increased plankton blooms sequester more carbon dioxide? We don't know but the answers need to be found in the lab before using the living ocean as a testing facility. The Sea Shepherd Conservation Society is not in a position to determine scientific merit. We can only act upon the recommendations of scientific bodies and law enforcement agencies. As a partner with the Galapagos National Park and the Ecuadorian National Environmental Police we acted in accordance to their opposition to this scheme and we agreed with the EPA in the USA, and the Darwin Research Centre in the Galapagos, that the Planktos scheme lacked sufficient scientific credibility.

The Sea Shepherd Conservation Society will continue to monitor this kind of activity and will intervene if the plans do not demonstrate tested scientific experiments that show such plans are safe for marine life.