Sea Shepherd has temporarily lost drone contact with the Nisshin Maru and cannot guarantee that whaling has not begun. If so, it will proceed with two of the three harpoon vessels not involved in killing operations.

“If we had one more ship, there would be no possibility of any whales dying,” said Captain Paul Watson. “In July I met with Greenpeace representatives at the IWC and requested of them that they send one ship to support us. I told them that one more ship would shut down this entire fleet. They refused, and that is deeply disappointing, and as a result whales may die.”

“We have demonstrated that we can shut these poachers down and every year we become more effective than the year before. One more ship will give us the ability to throw a blanket of intervention over them that will completely extinguish their illegal operations,” said Captain Paul Watson.

Meanwhile despite being ordered out of the territorial waters of Australia’s MacQuarie Island, the Yushin Maru #3 continues to illegally remain inside the twelve mile territorial limit.

“The Japanese whalers act like they own the entire Southern Ocean,” said Bob Barker Captain Alex Cornelissen of the Netherlands. “They go where they want, when they want and do what they want, with complete contempt for Australian sovereignty.” 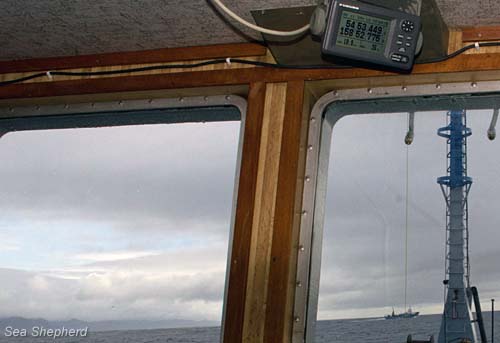 The Yushin Maru #3 with MacQuarie in the background, taken from the bridge of the Bob Barker
photo: Carolina A Castro