Sea Shepherd Cuts off Supplies to the Japanese Whaling Fleet

Captain Paul Watson responded to the interception of the Sun Laurel from the Steve Irwin, “We have found the Achilles heel of the whaling fleet and we intend to stay on it like a bloodhound and keep this ship from delivering fuel and supplies to the whaling fleet. This tanker’s support of Japan’s illegal activities makes the captain and crew of the Sun Laurel as culpable as the person firing the harpoon into a whale’s flesh.” 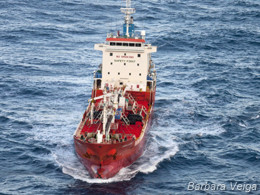 The Sun Laurel supply ship intercepted by
Sea Shepherd The Sea Shepherd ships have now chased the whaling fleet for 13 days, and with the harpoon ships tailing, finding and closing in on the Nisshin Maru has proven to be very difficult. The harpoon ships simply relay the position of the Steve Irwin and the Bob Barker ahead allowing the Nisshin Maru, allowing it to stay out of reach.

“So if we can’t go to the Nisshin Maru, the Nisshin Maru will have to come to us,” said Captain Watson. “They need to refuel soon, and we will be here with the Sun Laurel waiting for them to arrive. Refueling south of 60 degrees is illegal and we intend to enforce the Antarctic Treaty if they attempt to violate it.”

There is no evidence that any whales have been killed this season. The entire Japanese whaling fleet has been fleeing from the Sea Shepherd ships for nearly two weeks since being found on the eastern side of the Ross Sea on December 31, 2010.

The three Sea Shepherd ships are committed to spending the remainder of the whaling season in the Southern Ocean, but the season will be cut very short if the whaling ships are unable to refuel.

“It’s time for these poachers to take their harpoons and flensing knives and head home,” said Captain MacLean from the Gojira. “We have made it clear that they are not welcome in the sanctuary.”

For an update to this report visit this page.