Acting on a tip from a Costa Rican conservationist, the crew of the Farley Mowat located a property in Puntarenas where thousands of shark fins were in the process of being dried upon the rooftop of a building. This is direct violation to Costa Ricas recent ordinance (AJ-DIP/47-2001), which mandates that all shark carcasses landed at Costa Rica ports must have fins attached.

The Farley Mowat crew had to climb on top of parked semi-trailer to find the spot from which to video and photograph the shark fins.

As soon as the fishermen saw the cameras and the crew on top of the trailer, they immediately began to push and kick the shark fins off the roof and onto the ground below, and out of sight of the cameras.

After capturing the evidence on camera, the crew were confronted by an armed guard who accused them of trespassing. They ignored him and were able to bring back the evidence intact.

The illegal shark fin industry is huge and tens of thousands of sharks are being slaughtered to supply this gourmet luxury product.

The Sea Shepherd Conservation Society is battling this illicit industry on both ends. We are exposing it at its source and intercepting shark poachers at sea. In Asia Sea Shepherd activists like Grant Perriera in Singapore are leading publicity and educational campaigns to discourage consumers from buying this product. 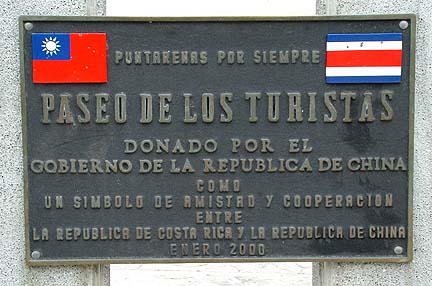 In exchange for foreign aid, Taiwan is expanding its fishing operations in Costa Rica and the trade in shark fins is growing.

Needless to say, Taiwanese pressure in Costa Rica to force Sea Shepherd out of an active role in helping to oppose illegal fishing is tremendous.