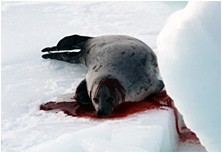 The Sea Shepherd crew onboard the Farley Mowat documented scenes of excessive brutality this morning as they moved through the ice some 35 miles north of Cape Breton Island, Nova Scotia. Sea Shepherd crew observed seals being shot and wounded and thrashing about in agony on the surface of the ocean.

The priorities of the Canadian Coast Guard seem to be in harassing the crew of the Farley Mowat and trying to prevent documentation of the inhumane slaughter of seals.

The Farley Mowat responded by saying; "permits. We don't need no stinkin' permits."

The Canadian government has no authority over a foreign registered ship traveling outside the Canadian twelve mile limit. The Farley Mowat is a Dutch ship with a Dutch Captain and a crew from the Netherlands, Great Britain, Sweden, France, Australia, New Zealand, the USA, Canada and South Africa. The crew of the Farley Mowat believe the Canadian Coast Guard should be concentrating on search and rescue operations instead of censoring observation of the slaughter of seals.

"This is incredible," said Captain Paul Watson, himself a former member of the Canadian Coast Guard. "The government of Canada allows hundreds of small non-ice class vessels to navigate in the most hostile waters on earth in heavy ice and they then say they have no contingency plans to deal with rescuing these same vessels. Perhaps if they spent less time making plans to prevent the documentation of the seal slaughter and more time being concerned about protecting human lives, these men would not have died."

The following are eye-witness accounts from crewmembers onboard the Farley Mowat. The very witnessing of these events is considered illegal by the Canadian government.

We encountered the sealing vessel the Cathy Erlene, registered to Sydney NS. Upon approach we saw two small aluminum boats carrying two men each darting from ice floe to ice floe searching for baby seals.  It seemed they had a system.  The barbarians on the Cathy Erlene were cruising through the ice searching for the few seal pups there were.  They carried on their disgusting massacre carelessly firing upon the unsuspecting babies, their only goal to find and maim the infants.  We witnessed two helpless victims, meters from the ship writhing in agony, hot blood spilling onto the ice and heard their cries as they continued to suffer for a good long time awaiting the small boats to arrive and fulfill their doom. Stepping onto the ice the babies, still alive turn their heads to the approaching man with a club. There is nothing humane about this massacre. What I saw today I will never forget, their cries will fill my thoughts and torture my soul.  I can say I am truly embarrassed to be of the same race as these cowards and ashamed to be a Canadian today.
-Shannon Mann, Canada

Nothing prepared me for this, no video or previous encounter with the sealers on the ice.  I watched in horror and disgust as two murderers clammered from their small boat, club in hand, and smashed in the skull of a baby harp seal.  For an hour or so my memories are fuzzy with blood, abuse and worst of all the cries of seals as they are brutally killed.  We will do whatever we can to expose this unnecessary, disgusting slaughter of life. Canada can not continue to censor its dirty secret any longer.
- Laura Dakin UK

First sight of human life on the ice I see two men lifting a seal impaled through the neck onto a sealing boat... the seal was still moving.  There was lots of ice covered with blood everywhere.  There was a larger boat that the smaller boats were dropping off the seals to be skinned, one of the crew of the boat got up to wave smuggly at us.  They were skinning them and throwing the seal carcasses back overboard.  They call it a seal hunt but I don't think walking up to a stationary seal and smashing its head in is hunting, it is an act of pure cruelty.  No wonder they don't want the rest of the world to see what is happening.
-Daniel Bishop, England

It is untrue to say that killing these seals is being done humanely.  Today we have seen sealers shooting the baby seals to wound them so they can't flee, beating them with wooden clubs then killing them by cutting the
arteries under their flippers.  The seals die slowly and in pain.  It is ahorrible thing to see.
- Dr Merryn Redenbach, Australia

When I woke this morning I looked through the port hole and saw red patches of blood on the ice and I knew the seal hunt had begun.  On the deck I immediately saw a small boat and two men who stopped on a little piece of ice in order to slaughter an innocent baby harp seal.  Actually there were two small boats and one sealing ship.  The hunters carried a hakapik and bashed the seal's head.  Some of the seals were still alive when they were delivered back to the sealing ship where they were finally skinned.
- Anne Fourier, France

The Farley Mowat will continue to document the atrocities of the sealers and the incompetence of the Canadian Coast Guard. 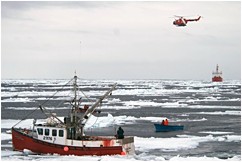 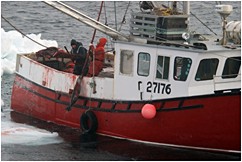 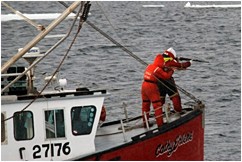 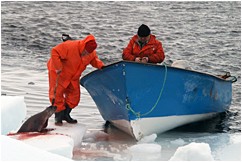 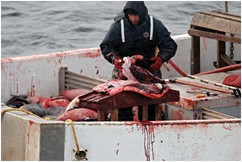 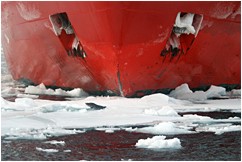