The unit has successfully crossed the Namibian border carrying high-tech equipment and is currently operating from an undisclosed location in the vast Namib desert. “We knew we had to be careful at the border as we knew another NGO was refused entry when it became clear they were entering Namibia to stop the seal slaughter, but our team crossed the border covertly at a crossing where they would never expect us,” explains Sea Shepherd South Africa Coordinator Rosie Kunneke.

After reaching the area of the seal slaughter the team immediately exercised a reconnaissance mission to see how the slaughter was organised this year. U.S. Army veteran Jake Weber explains: “The sealers and the government spent more money on security than ever before with armed patrols around the seal colony, a convoy of patrol cars surrounding the truck carrying the slaughtered baby seals, and guards with dogs patrolling the seal factory perimeter. They even sent out their brand new navy vessel ‘The Elephant’ to patrol along the Cape Cross coast. It’s their dirty little secret they don’t want anybody to know about.”

The biggest massacre takes place at Cape Cross which happens to be a designated seal reserve, and also the second largest tourist attraction in the Southern African country. The Namibian Government can make a larger, sustainable profit from live seals than it can from slaughtered ones and yet they continue to decimate the population of this vulnerable colony. This controversy is, simply said, insane on both a conservation and economical level. Sea Shepherd will continue to intervene and expose this atrocity until the whole world knows about it. Negative publicity will cost the Namibian tourist industry millions of dollars. Together with the rising cost of security, at some point it will force the government to shut down this atrocious practice. 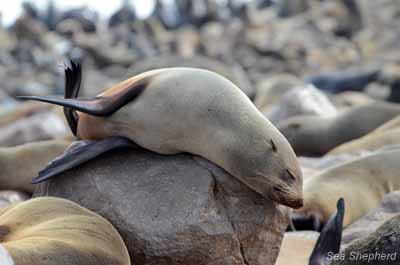