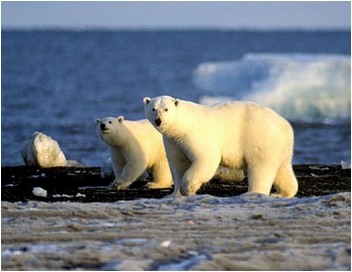 Sea Shepherd has written to the U.S. Department of Fish and Wildlife to urge the United States government to take action to protect the polar bear.

"The polar bear must be listed as threatened and polar bear pelts must be banned from import into the United States," said President and Founder of Sea Shepherd Conservation Society Captain Paul Watson.

"Hunting pressures are contributing to the diminishment of polar bear numbers already threatened by escalating trends in global warming and climate change," he added.

American hunters pay in excess of $35,000 for the "right" to slaughter a wild polar bear.

Oscar Wilde said it best when describing the British fox hunt and his words apply to polar bear hunters today: "The unspeakable in full pursuit of the uneatable."

"In a world of starving children," said Captain Watson, "we have impotent men squandering large sums of money to destroy a beautiful and rare creature for the sole purpose of adorning their den with the corpse of a superior animal. This action represents no common good, and is nothing more than the ultimate expression of selfish narcissistic behavior quite common to men who have severe sexual dysfunction."

Sea Shepherd recommends that polar bear hunters redirect their money to helping to alleviate poverty and suffering in the world instead of leaving a legacy of arrogant brutality and ignorant non-productive inhumane pursuits.

Copy of Letter to U.S. Fish and Wildlife:

To: U.S. Fish and Wildlife
From: The Sea Shepherd Conservation Society

On behalf of the 35,000 plus members of Sea Shepherd Conservation Society I am writing to support the position of listing the polar bear as a threatened species.

The trophy hunting of polar bears threatens a species already seriously threatened by the consequences of global warming and climate change.

We trust that the U.S. Department of Fish and Wildlife will carefully analyze the data on population and the impact of global warming and hunting pressures on the polar bear.

The killing of polar bears, especially in Northern Canada, is in our opinion, an unsustainable recreational activity that has no place in a region facing rapid climate change and the accompanying uncertainties this change will have on wildlife.

The Sea Shepherd Conservation Society supports the listing of the polar bear as a threatened species and supports the ban on imports of polar bear pelts into the United States.