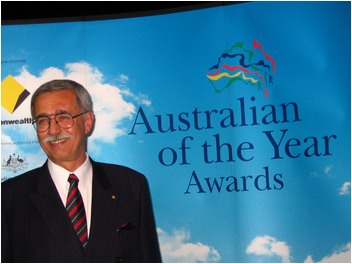 Australian merchant banker Phil Wollen has been chosen as Australian of the Year for the state of Victoria.

Phil Wollen and his wife Trix attended the ceremony at the National Gallery of Victoria on November 16, where he was presented with the distinguished award.

Phil Wollen set up the Winsome Kindness Trust to fund hundreds of humanitarian, environmental, and animal rights causes around the world.

His philanthropic generosity has changed the lives of animals, both human and non-human, around the world. In addition to his support for Sea Shepherd Conservation Society, Phil helps fund Animals Asia in China and Seal Alert in South Africa and many other groups in need in 34 countries.

"We are thrilled to see Phil Wollen be given this recognition," said Captain Paul Watson, founder and president of Sea Shepherd. "Phil has been our champion here in Melbourne. He helped us to get a berth for our ship and to get much needed support. He has helped us to secure a second ship for our campaign to oppose illegal whaling operations by Japanese whalers in the waters of the Australian Antarctic Territory."

Phil is now being considered for the National Australian of the Year Award.