If those killings were once necessary to the survival of the Faroese people, those days are long gone. The Faroese population now enjoys the highest standard of living in Europe and also receives important subsidies from Europe through Denmark.

Due to the fact that the flesh of the pilot whales now contains very high levels of mercury and pollutants, Faroese health officials have stated that it is no longer suited for human consumption. Indeed, the levels of mercury can reach ten times higher than European legal limits. Yet, the Grindadrap continues. It is now the largest slaughter of marine mammals in Europe.

Pilot whales must endure many modern threats (overfishing, competition for food, acidification of the oceans, bycatch, military sonar exercises/seismic tests and more). On top of these threats, this magnificent species should not have to suffer useless slaughters, presented as traditional practice, when in fact the most modern technology is being used. Motor boats, jet-skis, cell phones, radar and even a helicopter have replaced the row boats and the smoke signals (for communication) that were used in centuries gone.

Everywhere else in Europe, pilot whales are being protected and efforts are being made to reduce bycatch and accidental disturbances/risks, but in the Faroe Islands, entire families are still being driven to the beaches and being completely exterminated in one of the most brutal, man-made slaughters on Earth. Due to their complex intelligence and strong social bond with their podmates, their high level of self-awareness and very strong solidarity with one another, these creatures suffer a tremendous amount of stress and unspeakable agony before and during the actual killing, which ironically comes as the liberating outcome of this horrific torture.

“With long lances and knives the men fought, using hooks attached to lines to draw the boats within striking distance; and as the blood flowed freely from the wounded whales, their comrades would not leave them. Even if they reached clear water, they turned again ‘seeking the blood.’ The large whales seemed to be trying to protect the small ones. Some of the whales, maddened by lance wounds, rushed forward and were stranded in the shallows where they were met by men of Sorvagur and Bour, who, breast deep in blood and water, struck again and again with their grind knives to severe the spinal cord. (…) At last it was over. Not one whale escaped. A hot, heavy odor filled the air; two hundred eighty-six whales lay dead and dying on Midvagur Beach. (…) Their broad thick lips curved backward in a grotesque smile, disclosing the small white teeths clenched fast. There lay the leader of the flock, and there – oh the pity of it! – were poor little baby whales lying by their mothers, born in the agony of panic and of death.”

The “Grind” is a holdover from a bloody era. It has done its time. If we’re not able to put an end to slaughters as cruel and senseless as this one, how can we hope to reasonably succeed in the far more challenging task of halting the devastating effects of our standard of overconsumption on this planet? Today, humankind has to mature or it will die. It is time for present generations to start caring for this world that we are borrowing from our children. It is time to relegate the “Grind” to where it belongs — the past — and put an end to the largest slaughter of marine mammals in Europe.

Sea Shepherd - France would like to warmly acknowledge the precious support of Mr. Sylvain Leroy, our pro bono attorney from Bordeaux, France, for all of his work on this case. The full complaint presented to the European Commission will be available soon. 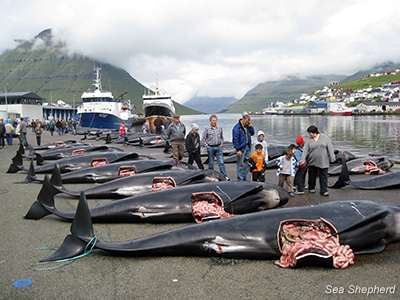