This quota was set in compliance with ICCAT’s bluefin tuna “recovery plan,” which is anticipated by its creators to allow the bluefin a 60% chance of recovery by 2020. Now, would anyone take a flight if the announced probability of reaching your destination is a mere 60%, allowing passengers a 40% chance of crashing? Most likely not…but apparently, this was good enough for the organization in charge of bluefin tuna conservation.

This year, due to the Libyan war, Libya banned all bluefin fishing in its waters. Therefore, all Libyan flagged ships had no right to take part in the fishing season and had to remain in port. It is in the Libyan fishing zone that Sea Shepherd released 800 illegally caught bluefin in June 2010. The 800 tuna were destined for a Maltese fishing farm owned by Fish and Fish Ltd.

And despite the dangers of war, Sea Shepherd set out for our second annual campaign of patrolling the Mediterranean Sea in search of illegal fishing targeted at the endangered bluefin tuna, including in the Libyan war zone where the chaotic situation of the war could tempt poachers.

The quite irritating but interesting enlightenment of this campaign is that more than the war or any other factor, it is from the very organization supposed to be in charge of the preservation of bluefin that most of the problems originated. The lack of transparency regarding very simple information that could help identify an illegal operation made this campaign extremely hard, if not impossible, in terms of knowing whether we were facing legal or illegal fishermen. Sea Shepherd condemns all bluefin tuna fishing, especially by purse seiners, but being an anti-poaching organization, we require assurance that an operation is illegal is before we take action. The current lack of clarity serves the poachers, but certainly not the bluefin tuna. Can one reasonably expect anything else from an organization that is essentially a conglomerate of tuna fishing countries? What logic is there in asking the people benefiting from the most profitable fishery in the world to regulate their own appetites for profits—even as they poach highly endangered bluefin to satisfy the appetites of irresponsible consumers? Would we ask a country’s drivers to set speed limits, to choose where to place check points, and to decide how high traffic fines should be?

EU Commission spokesman, Nationalist MEP Simon Busuttil, recently said of Sea Shepherd’s attempts to halt illegal bluefin tuna activities in the Mediterranean, “We have not given any NGO any mandate to carry out inspections. If these things are happening, fishermen should immediately report these illegalities so we can take the necessary measures. Inspections are only carried by authorities from EU member states and no one else.” And he is telling the truth. The EU hasn’t mandated Sea Shepherd, but we have been asked to provide information to them (with no return of the favor of course). 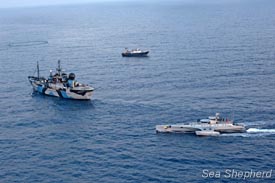 A bird’s eye view of the Sea Shepherd’s fleet at sea, tuna net and fishing vessel. Photo: Michelle McCarronSea Shepherd does not act as if we are under the authority of or on behalf of the ICCAT or the EU. Sea Shepherd acts under the World Charter for Nature of the United Nations that allows NGOs to help enforce environmental laws (within the boundaries of law) when authorities fail to effectively do so. Environmental laws are made to protect common interests versus private ones, and citizens’ interests versus those of corporations.’

What Mister Busuttil forgets is that regardless of the incapacity of both ICCAT and the EU to effectively protect bluefins from poaching, such a “resource” as the bluefin belongs to neither ICCAT nor the EU, but rather to all of humanity…and still he insists that no NGO is allowed to assist in this crucial conservation mission. Such a defensive attitude would not be as frustrating if these organizations were not failing their mission and actually had illegal fishing under control. However, as the population of bluefin tuna in the Mediterranean Sea has declined by 85% since 1970, one must doubt that it is the case. If, or more likely when, this species collapses, the responsibility is entirely theirs but the tragedy will befall us all. Their failure will be our irreparable, inestimable, and universal loss.

On June 11, the Steve Irwin and the Brigitte Bardot met with a group of Tunisian fishing vessels. Not all of them had a quota and some were not allowed to be actively fishing. Some were just “assisting” or towing vessels. We asked to speak to the ICCAT inspector onboard one of the purse seiners; the scene that followed would be quite comical if this issue wasn’t so serious. Basically, no one could believe that “Mohammed,” who was presenting himself as the ICCAT inspector, was actually who he said he was simply because we could all hear him repeating the numbers and names that the fishermen in back of him were dictating. We later received confirmation from the French Navy ship Commandant du Coin that this person was indeed the official representative of the ICCAT.

Unless one is a member of the ICCAT, there is no way to actually know whether someone is a real inspector, if the authorization to regroup several quotas under one vessel is valid or not, and other basic information that if it were only made public, could help expose these illegal activities. This lack of transparency combined with the fact that much of the information on the ICCAT listing of registered fishing vessels is not properly updated, certainly does not serve the bluefin’s interest. Such inadequacies are precisely what allows poaching to go on and what keeps a law-enforcement group like Sea Shepherd from being able to effectively take action.

The other interesting thing that happened that day is how the French Navy, who sent an aircraft for surveillance above us, blindly took the Tunisian fishermen’s side even though we had not come anywhere near their cages or showed hostility towards them (and their own non-edited footage can easily support this statement). In regards to their demands for us to leave the area, Captain Paul Watson simply answered that being in international waters they had no authority to request this of us. While the fishermen were accusing us of having crew in the water ready to cut their nets, the French Navy could see, with both their eyes and cameras, that all of our crew were in a small motorized boat and nowhere near their cages. As a French citizen myself, I wonder why the French Navy would blindly side with the Tunisian fishermen.

To conclude, during this second Mediterranean campaign against illegal bluefin tuna fishing, Sea Shepherd actively patrolled the Libyan war zone and beyond. Without the pretention of completely eliminating poaching operations, our presence has most certainly served as a deterrent to illegal operations, as poachers knew that we would cut their nets, release their fish, and cost them enormous sums of money. We would also generate media attention and bad publicity focused on their companies’ involvement in illegal operations. Fishermen we’ve met this year were well aware of our precedent-setting actions the previous fishing season.

Given the current situation - the technological, human, and financial resources at our disposal at present time, and the complete lack of transparency from authorities responsible for so-called regulating this highly lucrative fishing industry, we were prevented from being any more successful within the confines of the law. We would be happy to remove ourselves from what should be the business of the ICCAT and the EU, if only they were actually doing the job. There are plenty of other marine wildlife issues that require our interventions, but unfortunately, as long as the sole entities regulating the fisheries are the ones who benefit from them, the bluefin tuna will remain on Sea Shepherd’s agenda. In the meantime, it would be more accurate for the general public to refer to the ICCAT as the International Conspiracy of Consumers of Atlantic Tuna. It doesn’t sound wonderful, but is certainly a more accurate description of what they represent. 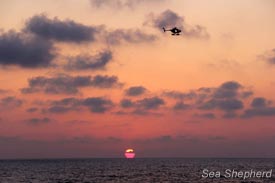