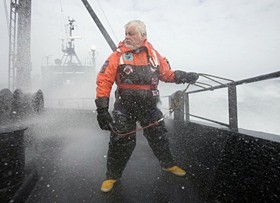 Its time for Round Two in the battle to save the endangered whales in the Antarctic Whale Sanctuary. After a month and a half of chasing the Japanese whaling fleet, we have been forced to return to refuel.

But we need to return South again as soon as possible. Every day we are away, whales die. The whale slaughter lasts for four months and to stop the killing we need the fuel, provisions, and maintenance to keep our ship at sea so that we can keep intervening against their illegal whaling activities.

And to do that we need to refuel and reprovision three times during this campaign.

The good news this year is that fuel and oil costs are down. In fact, it is going to cost us US$90,000 less this year, than last, to fill up our fuel tanks with 200 tons of diesel.

The bad news is that it is still expensive and with the economic downturn internationally, it is more difficult to raise donations. Globally, all nonprofits are suffering.

And thus we need to appeal once again for the funds to enable us to return to the Southern Ocean Whale Sanctuary to resume our interventions against illegal Japanese whaling activities.

This promises to be the most successful intervention year yet. Last year was amazingly successful with the whalers getting just half their quota and losing US$70 million profits. This year we hit them a month earlier and they have one of their three harpoon boats knocked out of the hunt. We shut them down for three solid weeks and when we return we intend to add another four weeks to their downtime.

We can defeat this multi-million dollar illegal slaughter of the whales by speaking the language they understand profit and losses. For every whale the Japanese kill they make about US$200,000. By continuing to keep their losses greater than their profits we can knock them out economically.

The Japanese whaling industry brings in over $200 million dollars when left unhindered and free to kill wherever and whenever they choose. They lose their profits when we intervene and this is our fifth year doing just that.

We are a small organization of international volunteers and just as any nations navy needs funding to be strong, we need your financial support for the Whales Navy.

A donation to the Sea Shepherd Conservation Society is an investment in the survival of our worlds marine ecosystems. Sea Shepherd remains, after three decades, a small dedicated crew of volunteers unencumbered by bureaucracy.

The price we pay for being small is to have a small budget, but then again, we accomplish more on our small budget than large conservation groups are able to do with hundreds of millions of dollars.

Your donation to Sea Shepherd in response to this appeal goes to administering, maintaining and operating our ships it goes to getting the job done, where it counts, out there in the killing fields, where we have demonstrated time and again that we can shut down the killing machines and we can save the lives of whales, sharks, turtles, dolphins, seabirds and fish.

Please consider donating what you can to keep us moving and intervening in the Southern Ocean Whale Sanctuary.

Together we are making a difference. Together we can drive the whalers out of the Southern Ocean Whale Sanctuary forever.