The Sea Shepherd Conservation Society is urging yacht owners, divers, and conservationists to destroy any Fish Aggregating Devices (FAD's) they encounter on the high seas. 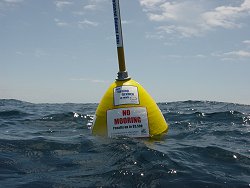 This last weekend, dozens of FAD's were hunted down and destroyed by divers and marine conservation officers at "secret" offshore fishing locations off KwaZulu-Natal in South Africa.

A Fish Aggregating Device is an artificial fish magnet constructed of plastic streamers, shadecloth and reflective objects which lure fish. They are held in position by floating buoys, rope and anchors. They are rapidly colonized by small marine creatures and young fish, which in turn, attract several types of bigger fish to the artificial mini ecosystems.

Captain Paul Watson and his crew have destroyed a few of these over the years that they found floating in the Atlantic. Usually these devices are set by commercial operations. The cheaper constructions are usually set by recreational fisheries.

Over the past two years, an unknown number of FADs have been illegally placed off the Durban and the KwaZulu-Natal coastline. Their GPS log positions are jealously guarded by a select few anglers.

Rudi van de Elst, head of the Oceanographic Research Institute (ORI) in Durban, said studies in other parts of the world suggested that FADS were effective in attracting fish like tuna because they provided a recognizable "reference point" in open waters.

"They are illegal. We could only support their use if they were installed legally, in consultation with all relevant parties, such as KwaZulu-Natal Wildlife, Environment Affairs, ORI and maritime safety."

Captain Paul Watson has applauded the destruction of these devices by KwaZulu-Natal authorities.
"These devices are strewn throughout the world's oceans and not just along coastlines. We have found them hundreds of miles offshore. If found they should be destroyed. They are illegal and pose a serious threat to some fish species." Watson said.

Added Captain Watson, "Fish populations around the world have been severely over-stressed and over-exploited. These creatures simply stand no chance against modern technological innovations designed to catch them. No fish is safe. No fish has a place of sanctuary. They may as well all be placed in some restaurant display case because we no longer have wild fish populations, we now have free range seafood and it is only a matter of time until they are all rounded up and consumed by humanity."