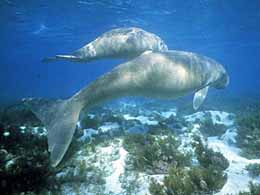 Photo courtesy of Great Barrier Reef Marine
Park AuthorityMandaburra man James Epong, who lives on his traditional lands an hour south of Cairns and Yarrabah, stated,"Nine times out of ten, the illegal trade is to sell the meat for grog money or drugs. One person we know of in Yarrabah made eighty thousand dollars one year from selling dugong and turtle meat.”

The Mandubarra people have declared a moratorium on taking turtle and dugong from their sea country, but around them, the illegal meat trade continues.

With the loss of vast areas of sea grass habitat due to the Queensland floods, entanglement in fishing gear and nets, the future for the endangered green turtles and dugongs looks bleak, unless we act now.

The oceans that give us up to eighty percent of the air we breath are in deep trouble globally. The single most important thing humanity should be focusing on is ensuring the biodiversity of the oceans.

There can be no special dispensation based on race or culture when it comes to the exploitation of an endangered species.

Sea Shepherd is backing Bob Irwin and Colin Riddell's call for a moratorium on Dugong and Turtle hunting in Australia.

To demand immediate action on a moratorium on turtle and dugong hunting in Australia, please write to: