There are only about 100 Western Pacific gray whales left in the world and Shell Oil's Sakhalin II oil and gas mega-project in Russia's northeast region could wipe them out. 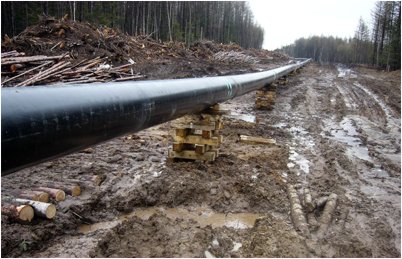 If the project proceeds as planned, oil will move from offshore platforms through an earthquake zone and down an 800-kilometer pipeline that crosses 24 active seismic faults and more than 200 wild salmon spawning rivers and tributaries. New photographs leaked to Sakhalin Environment Watch by project-insiders reveal gross violations of Russian law. Reckless pipeline construction slashes through forest ecosystems and destroys pristine wild salmon spawning streams and tributaries in its path.

According to a report by The World Conservation Union (IUCN) released in February, (entitled Impacts of Sakhalin II Phase 2 on Western Pacific Gray Whales and Related Biodiversity), "the most precautionary approach would be to suspend present operations and delay further development of the oil and gas reserves in the vicinity of the gray whale feeding grounds off Sakhalin, and especially the critical nearshore feeding ground that is used preferentially by mothers and calves." The report states, "The small population of western gray whales, numbering only about 100 animals, is on the edge of survival. It was reduced to such low numbers by commercial whaling that in the mid 20th  century it was thought to be extinct. The population is listed by IUCN - The World Conservation Union - as ‘critically endangered' and also has been the focus of concern by the International Whaling Commission (IWC) and the 3rd World Conservation Congress. The few surviving animals (possibly including only 23 reproductively active females) face a number of hazards throughout their range." A complete copy of the report can be found at www.iucn.org.

This is an opportunity to support the gray whales every time you purchase fuel. Simply don't pull into a Shell gas station. Return your shell credit card if you have one along with a note protesting the threat to the whales.

Sea Shepherd Conservation Society unfortunately has to purchase between $100,000 and $200,000 worth of fuel each year to operate our ships at sea. Usually one company is as bad as any other company but now we have a company that presents a direct threat to the whales and Shell will not be getting any business from Sea Shepherd until this Sakhalin II Project is shut down.