Claims by Japan that rotten butter caused injuries to sailors is bogus. The Japanese whalers are always claiming that Sea Shepherd is throwing acid at them, insinuating that it is a caustic liquid like sulfuric acid, when in fact it is simply rotten butter, which is also known as butyric acid (just as milk has lactic acid and orange juice has citric acid). Butyric acid is a foul smelling substance but does not cause harm upon skin contact. It is less acidic than beer.

The Sea Shepherd ships did not attempt to foul the propellers of the Japanese whalers as claimed by the ICR. Both the Bob Barker and the Steve Irwin deployed a long hawser astern of both ships to discourage the harpoons vessels from making intimidating attacks with water cannons and Long Range Acoustical Weapons (LRADs). The only danger of entanglement was when the harpoon vessels approached the Sea Shepherd ships. Deployment of prop fouling gear is defensive and not offensive.

The Sea Shepherd Conservation Society strongly condemns the Japanese whaling fleet for reentering the Southern Ocean Whale Sanctuary and intends to prevent any illegal whaling activities in the Sanctuary. All illegal whaling operations have been shut down for the last week and Sea Shepherd intends to shut down operations for another week to cost the Japanese whaling fleet profits and to cut the lethal kill quota. 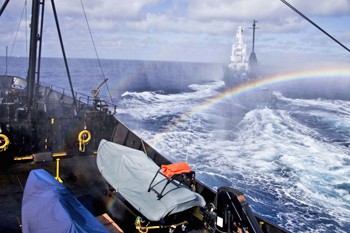