"It was a somewhat frightening scene to see hard ice growlers the size of houses being tossed about like confetti in massive swells driven by gale force winds," reported Captain Paul Watson. "I had to thread the ship between those bucking chunks of lethal ice knowing that if just one of them was tossed against our hull, we would be holed and sunk very quickly. I was not completely confident that we would make it, a thought that I did not share with the crew at the time."

The coast of Antarctica is remote, unpredictable, and hostile to human life and not a place for the faint hearted. A constant vigil must be kept on weather and ice conditions. Added to this is the violence of the whalers who will not hesitate to fire upon whale defenders in defense of their illegal profits. 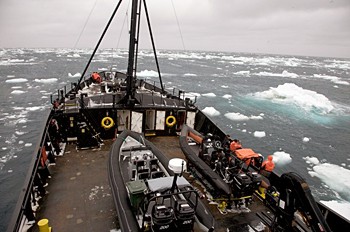 The M/V Steve Irwin navigates through a large field of growlers
in 6-7 meter swells and 40-knot winds. Antarctica. Photo: Eric Cheng
The Japanese whale processing ship Nisshin Maru is
spotted from a distance by helicopter crew