Sea Shepherd at the Heart of a Japanese Scandal

As The Yomiuri Shimbun reports:

"Fiscal allocations for the reconstruction of areas devastated by the Great East Japan Earthquake have been used for projects not directly related to disaster-stricken areas. This diversion of funds cannot be ignored."

"Under pressure from the Liberal Democratic Party at the House of Representatives Committee on Audit and Oversight of Administration, the Finance Ministry and other ministries listed projects under way. Many of the projects are suspected of not being essential to reconstruction. The Agriculture, Forestry and Fisheries Ministry earmarked the cost for dealing with Sea Shepherd, an anti-whaling organization, as part of its reconstruction budget. Its reasoning is that unless anti-whaling protests can be halted, it will affect the reconstruction of Ishinomaki, Miyagi Prefecture, which has whale processing facilities."  The Yomiuri Shimbun described this as Deputy Prime Minister Katsuya Okada's "lame excuse." 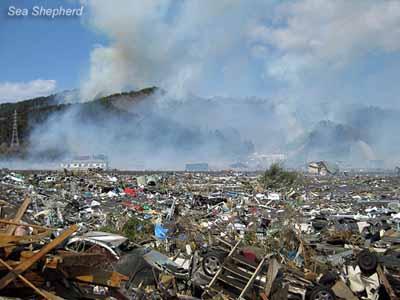 It appears that the allocation to oppose Sea Shepherd was one of the most blatantly disconnected misuses of the funds. The $30 million has been earmarked towards a public relations campaign against Sea Shepherd, to a lawsuit filed in the United States seeking an injunction against Sea Shepherd, to pressuring Costa Rica to resurrect a decade-old, previously dismissed charge against Captain Paul Watson and also pressuring Interpol to issue a ‘Red List’ notice for Captain Watson. Funds were also allocated to provide for a security ship to accompany the whaling fleet.

Critics both within and outside of Japan, angered by the misuse of funds, are wondering just how much more of this Disaster Relief Fund money will be wasted in the defense of a bankrupt whaling industry posing as a research project that has not produced a single peer-reviewed international scientific paper in the quarter of a century that it has been in operation. The whaler's factory ship, Nisshin Maru, is now in drydock in Hiroshima being upgraded at enormous public expense. Meanwhile, four Sea Shepherd ships are waiting in the South Pacific to once again intervene against this scandal-ridden industry that only continues to exist as a glorified welfare project funded by individuals who thought their donations were going to help people, not to slaughter whales. 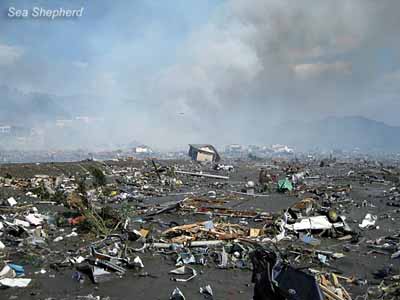 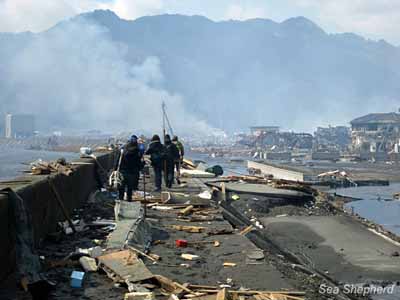