Captain Locky MacLean stated “we will use one of the heritage sheds at Seaworks as a workshop for ship operations as well as a memorabilia display, while the other building would be converted into a maritime education and presentation facility and provide ships office space.”  In general, one or two of the ships would be berthed at the site for up to 20 weeks of the year, in between campaigns.  Visitors to the site will be able to experience first-hand life aboard a Sea Shepherd vessel.

Even when the ships are not docked at Seaworks in Williamstown, the organisation’s history and activities will be showcased in a permanent gallery and exhibit.

Sea Shepherd Australia Director, Jeff Hansen stated, “The history of the Williamstown maritime precinct ties in very well with Sea Shepherd’s 35 years of marine conservation on the high seas. On a personal note, it’s also great to see that when our ships call Seaworks home, the HMAS Castlemaine is just a stones throw away. The ship, an old WWII warship, was one of the Bathurst Class corvettes and the same vessel that was with the HMAS Armidale the day before it was sunk on December 1st 1942. Onboard the Armidale was ordinary seaman Teddy Sheean, whose amazing heroic act of bravery can be read here. Teddy Sheean was my great uncle,” stated Hansen proudly.

Trevor Huggard also went on to say, “We see this arrangement with Sea Shepherd complementing the educational aspect of our maritime precinct by offering ship tours, marine conservation education, and displaying a real ship’s workshop. The Sea Shepherd organisation understands and supports our vision of a working maritime precinct and we look forward to working together for the mutual benefit of the Seaworks site.” Having this new base for Sea Shepherd at Seaworks would also bring a significant economic boost to the Hobsons Bay area. This may include use of local businesses for ship repairs and maintenance, fuel, and provisions for long campaigns at sea.

Seaworks is based at 82 Nelson Place Williamstown, and is open to the public for educational, tourism, and recreational activities.

Free ship tours are offered Saturday and Sunday 10am to 4.30pm when Sea Shepherd vessels are in port. Further enquiries can be made at australia@seashepherd.org or phoning +61 (0) 3 94450 323. 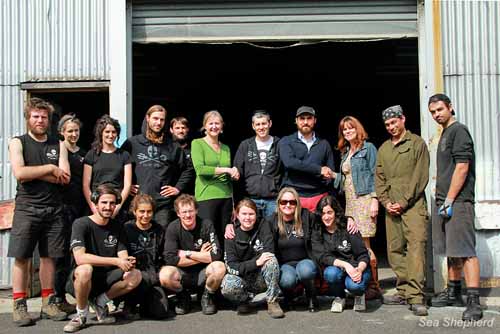