In response, as the bluefin tuna’s last defense, Sea Shepherd will actively enforce conservation laws by opposing the poaching currently threatening the species. 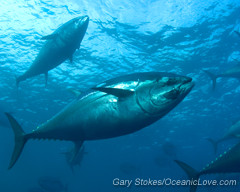 It is outrageous that the bluefin are being fished to extinction and not a single government in the world is doing anything about it. The Atlantic bluefin tuna (Thunnus thynnus) is one of the largest and fastest fish in the world.  It is also a slow-growing and long-lived species, making the current overfishing crisis all the more serious not only for the tuna, but for the ocean ecosystems within which they live.

Sea Shepherd Founder and President Captain Paul Watson says, “I am angry that the bluefin tuna crisis has gotten so out of hand. The fishing industry is literally investing in the extinction of this species so that they can control the price by hoarding the entire supply of bluefin tuna in cold storage.  This kind of greed cannot be allowed to continue.”

The bluefin tuna fishing season lasts from mid-May until August.  Sea Shepherd will commence Operation Blue Rage immediately upon arrival in the Mediterranean.

Check out the NEW website for Operation Blue Rage!