On board will be an Animal Planet film crew to document the 3rd season of Whale Wars.

“Letting the world see what happens to the whales in the Southern Ocean is the most powerful anti-whaling weapon at our disposal,” said Laurens de Groot, a Sea Shepherd Netherlands Director. “The cameras are more powerful than cannons and our ammunition is the naked truth about illegal whaling. We intend to keep the focus on Japanese crimes and we intend to sink the Japanese whaling fleet – economically.”

An international crew of volunteers will crew the ships to the Southern Ocean but this year’s campaign will have an Australian face. For this reason the name Operation Waltzing Matilda has been chosen. This is the unofficial national anthem of Australia. Translated from Aussie it means "hiking with a bedroll or pack."

“Australians are the most passionate whale defenders on the planet,” said Captain Watson. “Operation Waltzing Matilda will reflect our gratitude to Australia for the incredible support we have received from the people of this wonderful nation since 2005. The Steve Irwin will depart in December from Western Australia with the majority of the crew being Australians.”

Kylie Herd, a Sea Shepherd crewmember from Perth attending the IWC Conference in Madeira said, “Our logo this year is modeled on the art that adorned the fighter planes of the legendary Flying Tigers who fought the Japanese Imperial forces in China. The colors of the Aboriginal and Australian flags have been incorporated into the design with the pirate kangaroo holding Neptune’s trident of justice. We intend to waltz down to the Southern Ocean to dance dangerously with the Japanese whaling fleet and we intend to unroll a Matilda full of defensive tactics for the whales against the Japanese whale poachers.”

As usual, Sea Shepherd has some new surprises for the Japanese pirate whalers this year and the whalers will surely have some surprises for Sea Shepherd. The confrontations are escalating as the whalers lose more and more money each year. The Sea Shepherd crew intends to persist and will never retreat from the Southern Ocean Whale Sanctuary until the last harpoon has been silenced and the word “sanctuary” is understood once and for all. There is no retreat for Sea Shepherd from the whale wars, there is only victory or defeat for the whales, and we do not intend see the whales defeated, nor do we intend to let these blubber chewing murdering barbarian butchers win. 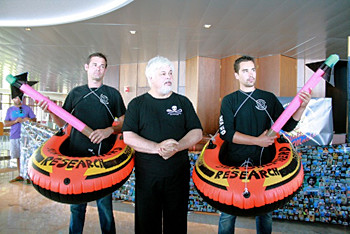 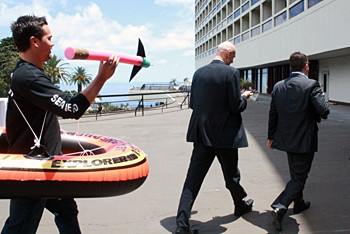