The free meeting is at 6:30 p.m. in the Banquet Room, Rivershore Hotel, 1900 Clackamette Drive.

Hunt was one of the driving forces behind House Bill 3255, which stepped up non-lethal hazing of the sea lions below Willamette Falls on the Willamette River during the annual congregations of salmon and steelhead runs.

Between the year 2002 and 2005, the annual Columbia River salmon runs saw an alarming decline in the number of salmon observed traveling up river during the spawn. Populations of endangered salmon species had fallen from 285,000 to a jaw dropping 82,000 in only three years. The three fishery departments of the states that share the Columbia River, Idaho, Oregon, and Washington, went into action. In 2006, as part of their effort, these three states chose to wage war on the recently returned California Sea Lion.

The Marine Mammal Protection Act (MMPA), passed exactly forty years ago, provided federal protection for over 125 species of marine mammals in the United States, including pinnipeds, the class of animals that seals and sea lions belong to. A precursor to the worldwide ban on commercial whaling instituted in 1981, under the MMPA, in the United States, the MMPA established a moratorium on the taking of marine mammals in U.S. waters. It defines “take” to mean “to hunt, harass, capture, or kill” any marine mammal or attempt to do so. The inclusion of harassment in the definition was a groundbreaking action by Congress. In 1994, the federal government amended the MMPA to include a program to authorize and control the taking of marine mammals incidental to commercial fishing operations. This paved the way for man-made overfishing to be blamed on marine mammals, like the California Sea Lion, and allowed states to obtain authorization for the controlled killing of these pinniped scapegoats. 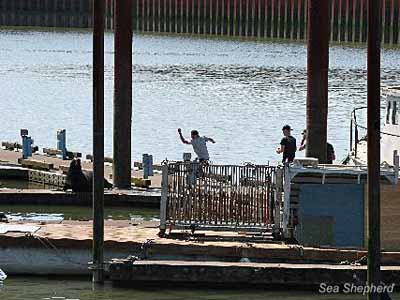 One of those limited exemptions is section 120 of the MMPA, which permits the Secretary of Commerce to “authorize the intentional lethal taking of individually identifiable pinnipeds which are having a significant negative impact on the decline or recovery of salmonid fishery stocks” listed as threatened or endangered. The Secretary of Commerce is required  to consider a number of other factors, including “how many individual pinnipeds are involved” in the significant negative impact and “the extent to which such pinnipeds are causing undue injury or impact to” fish populations. Congress intended for NMFS to authorize lethal take of sea lions under Section 120 of the MMPA sparingly. House Report. No. 103-439 (1994) made it clear that Congress “intends that the current levels of protection afforded to seals and sea lions under the Act should not be lifted without first giving careful consideration to other reasons for the decline”.

That brings us to today. The states in question have repeatedly filed for this exemption and, due in a large part to the efforts of the American Humane Society’s legal defense team, these filings have been overturned time and time again, most recently rejected by the Ninth Circuit Court of Appeals, one step below the Supreme Court. What the courts have time and time again ruled is made obvious by the simple facts presented by those three states in their own applications: the sea lions are not the cause of the salmon decline. In the past 6 years, the salmon populations have rebounded, but this rebound cannot be attributed to the wanton slaughter of sea lions. 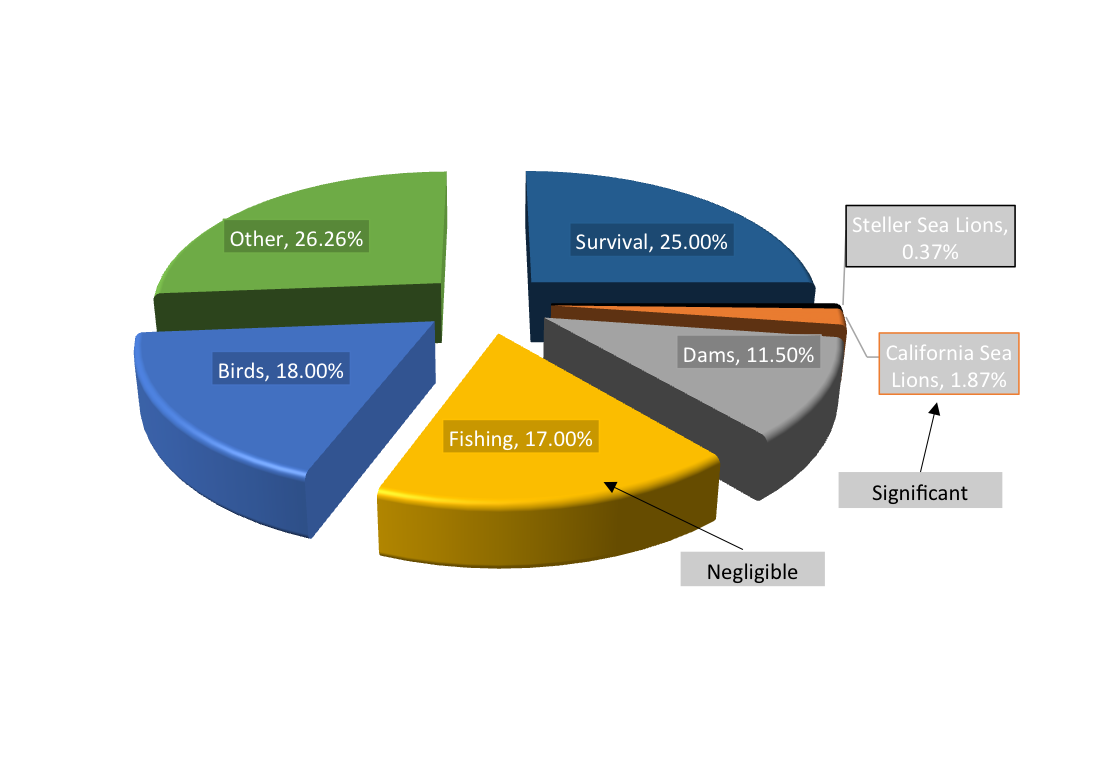 When the states file their annual fishing quotas for commercial and recreational fishing, they must set the quotas at a level that does not threaten the same salmon that the sea lions are eating. In filing their 2010 quota, they stated that the quota of 12% posed a “negligible impact” to the salmon populations. At the same time, these hypocritical officials deemed the 1.87% consumption by California sea lions to be a “significant” impact to those same salmon. As you may have noticed, the fishing number above is 17%. That’s right, commercial and recreational fishers exceeded their quota by a whopping 41%, yet no action was taken against these fishers. At the same time, California sea lions were being euthanized on the grounds of being observed eating salmon on 5 separate occasions.

When the states sought authorization, they included in their application a provision that if sea lion predation fell below 1% of the salmon run, they would discontinue the killing. Since 2006, predation rates have fallen from 4.2%, a number well below any yearly human fishing quota, to 1.1% in 2011. When the states re-filed in 2011 after the authorization was thrown out of court, they removed this threshold. Without removing this threshold, the states most likely would not be able to continue the killing. This shows an egregious and callous attitude for the lives of these sea lions. The states would rather murder innocent sea lions than face the facts that they themselves have collected and presented. Enough is enough. The states of Idaho, Oregon, and Washington are put on notice here and now: Stop breaking the law. Stop wasting money defending a ridiculous blood sport that your own documentation conclusively shows as a farce. 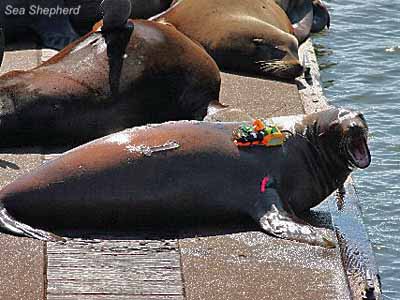 Sea lions that have been excessively tagged and branded are clearly in pain.
File Photo