"If you tell a lie big enough and keep repeating it, people will eventually come to believe it. The lie can be maintained only for such time as the State can shield the people from the political, economic and/or military consequences of the lie. It thus becomes vitally important for the State to use all of its powers to repress dissent, for the truth is the mortal enemy of the lie, and thus by extension, the truth is the greatest enemy of the State."

The bow of the Sea Shepherd ship Robert Hunter has been repaired. The damage was caused when our ship was deliberately rammed by the Japanese whaling ship Kaiko Maru in February of this year. The Japanese blamed us and accused the Sea Shepherd Conservation Society of deliberately ramming the Kaiko Maru. But it is not a question of we said and they said.

First of all if we had rammed the Kaiko Maru we would have proudly said so. We have always taken credit for our deliberate rammings. Secondly, the Australian Federal police did a forensic investigation of the damage. They have not released their results and we don't expect them to. We would have expected them to if they found us at fault but we are confident that their evidence supported our claim and for that reason we don't expect them to release any reports that might embarrass a major trading partner like Japan. 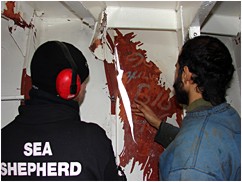 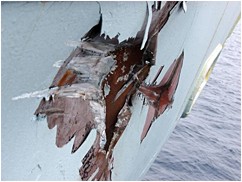 The Japanese whaling fleet has an expensive public relations company working for them with branches in New Zealand and Australia. They have two messages to constantly trumpet to obscure the illegal activities they are undertaking in Antarctic waters. First they constantly claim they are doing scientific lethal research whaling and pretend that this "research" is supported under law. It is not. Secondly they continue to call Sea Shepherd an "eco-terrorist" group using the old Joseph Goebbels strategy that if you tell a lie often enough and with conviction, people will begin to believe it.

Public relations firms for every major environmentally destructive corporation in the world constantly accuse their critics of being eco-terrorists. The reality is that the Sea Shepherd Conservation Society has never had a crewmember, officer or volunteer convicted of a felony crime and there has never been a Sea Shepherd action that has resulted in a death or injury - neither caused nor sustained. In 30 years Sea Shepherd has had an unblemished record of non-violence. Sea Shepherd crewmembers travel freely internationally and there is, according to the United States Federal Bureau of Investigation, no open investigative file on the activities of the Sea Shepherd Conservation Society.

So where does this eco-terrorism label come from? The answer is that it originates in the offices of public relations firms that are paid to create and disseminate lies.

The Japanese whaling fleet is targeting endangered fin and humpback whales and protected piked whales in the Southern Oceans Whale Sanctuary in violation of the global moratorium on commercial whaling and they are taking whales in the Australian Antarctic territorial waters in violation of Australian law. They are refueling their ships in Antarctic Treaty Zone areas in violation of the Antarctic Treaty and they are deliberately ramming Sea Shepherd and Greenpeace ships in remote Antarctic waters. These international environmental criminals have the audacity to call us "eco-terrorists" while they are illegally slaughtering whales. They even killed two of their own crewmembers this year through gross negligence.

The absurdity of their claims is even more clear when they condemn Greenpeace for being an eco-terrorist organization and all Greenpeace is doing down there is taking pictures of the whales that the Japanese are killing. Using a harpoon to savagely massacre whales is apparently non-violent in the eyes of Japan but taking a picture of a whale being harpooned is an act of terrorism. The inmates are clearly running this insane monkey house when violence is viewed as non-violent and non-violence is terrorism.

The Japanese research amounts to ridiculous positions like killing the whales to save them. They are doing research of course. A great deal of money and effort is going into marketing research to find ways new markets for whale meat and of course this also means product development research to find new ways to turn gentle intelligent creatures into marketable commodities. Yes, they say they use the entire whale and it is true because they waste nothing except for the whale itself.

This year Sea Shepherd is launching Operation Migaloo and it will be our most ambitious and expensive intervention to date against illegal Japanese whaling operations in the Southern Ocean Whale Sanctuary. We need every dollar, pound, euro, and Kruger rand we can get for fuel, equipment, reconnaissance, communications etc. We must stop the Japanese from murdering the rare humpbacks, the diminished populations of fins and the little piked whales.

21.  States and, to the extent they are able, other public authorities,
international organizations, individuals, groups and corporations shall:

(a)  Co-operate in the task of conserving nature through common
activities and other relevant actions, including information exchange and
consultations;

(b)  Establish standards for products and manufacturing processes that
may have adverse effects on nature, as well as agreed methodologies for
assessing these effects;

(c)  Implement the applicable international legal provisions for the
conservation of nature and the protection of the environment;

(d)  Ensure that activities within their jurisdictions or control do
not cause damage to the natural systems located within other States or in
the areas beyond the limits of national jurisdiction;

(e)  Safeguard and conserve nature in areas beyond national
jurisdiction.

22.  Taking fully into account the sovereignty of States over their
natural resources, each State shall give effect to the provisions of the
present Charter through its competent organs and in co-operation with other
States. 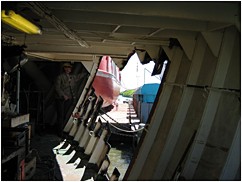 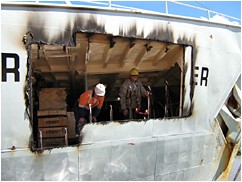 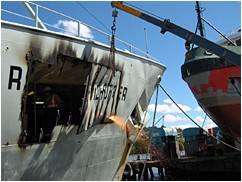 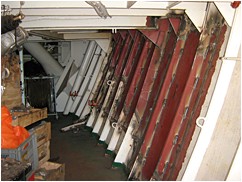