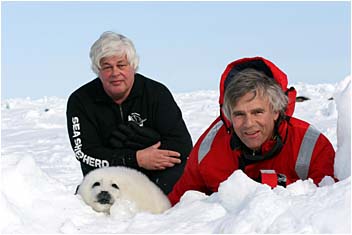 Sea Shepherd Board Member Richard Dean Anderson accompanied Captain Paul Watson to the
ice floes of Canada in March 2005 to help publicize the plight of the harp seals.

August 1, 2005   (Vancouver, BC): Richard Dean Anderson, Legends Memorabilia, and Sea Shepherd Conservation Society announce the launch of the "Signed and Sealed" charity autograph project to raise funds to assist Sea Shepherd in their efforts to stop the slaughter of Canadian seals.

This project offers a unique selection of photos of Richard with the baby seals taken on the ice floes in March 2005. Each photo has been personally signed by Richard Dean Anderson, and every single cent of the proceeds will go to Sea Shepherd Conservation Society.

The Canadian commercial seal hunt is the largest mass slaughter of marine mammals in the world, and Canada has slaughtered over 320,000 seals in March and April of 2005.

Paul Brown, President of Legends, said "We are delighted to help Richard and Sea Shepherd in their efforts to stop the seal hunt, and are confident that our many clients and friends around the world will join us in this project.

Since its inception in 1995, Legends has undertaken numerous charity projects involving the sale of memorabilia for worthy causes. With clients in 65 countries, the company is a global player in the memorabilia industry.

To see the pictures of Richard and the seals in a bigger format:
http://www.stargate-autographs.com/sga-imagepage-rda.html