Report on the Interception of the Costa Rican Longliner Kendy

Report on the Interception of the Costa Rican Longliner Kendy

The Farley Mowat first located the vessel on radar moving at 7 knots south between the islands of Darwin and Wolf.

First Mate, Alex Cornelissen, observed a line in the water, and he observed a Kendy crewmember cutting the line. Captain Watson asked if the cutting was filmed and the cameraman said that he believed that he caught it but was not sure.

After informing the Galapagos National Park, the Farley Mowat remained alongside the Kendy to await the arrival of an official Park boat.

At 2140 Hours, the Kendy turned off all lights and ran in the dark. It left a small light in the water to attempt to confuse the Farley Mowat hoping that it would indicate they were still in the same position. We were able to track their movements on radar quickly and pursued. The Farley Mowat fired four flares during the pursuit to illuminate the water. The Kendy agreed to stop and did so at 2213 Hours.

During this pursuit there was a large flock of birds following and diving on the Kendy. Captain Watson was concerned that the Kendy was dumping fish and/or shark fins.

The Kendy stayed alongside the Farley Mowat until 1000 Hours on June 11th when the Sirenian arrived to board and inspect the Costa Rican vessel. The Farley Mowat assisted in the boarding by providing a zodiac to transfer the rangers and marines to the Kendy.

No fish were found on the Kendy although the evidence of blood stained broken ice indicated that fish had recently been present.

Without the authority to board the Kendy, we were not able to initially inspect for fish or shark fins. This gave the Kendy a large window of opportunity to dump their catch. Captain Watson believes they did so during the half hour they ran dark on the evening of June 10.

The Kendy was escorted towards Baltra by the Sirenian with a Park ranger and a marine onboard. The Farley Mowat remains in the area. 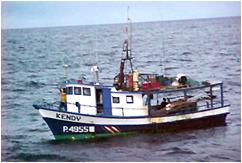