Report on Illegal Fishing Vessels Caught Inside the Marine Reserve

Unfortunately, they are right about the low penalties as was clearly proven with the Nano poaching operation. Even after being caught inside the Marine Reserve twice with illegal fishing gear and large numbers of sharks in their holds, the Nano was still only fined USD $8,000. The National Park did ask for the highest possible fines in that case, but since the laws they are applying are outdated, so are the fines.

Sea Shepherd was in the middle of discussing how we can prevent illegal fishermen who are being caught inside the Reserve from getting away without going to jail, when we heard about the Park catching the poachers. Luckily, we had the entire staff of the Environmental Police in our office attending a workshop. Lawyer Hugo Echeverría who was giving the workshop specializes in and teaches environmental, criminal law. Scott West, Sea Shepherd's criminal investigator, has many years of experience working cases like these for the EPA. With the strongest possible team in the right place at the right time, we decided to help the police file criminal charges against the illegal fishermen.

Captain Barriga, the head of Environmental Police in Galapagos, had the fishermen sent from Isabela to Santa Cruz where the judge and prosecutor reside. Both the judge and the prosecutor were actually in Galapagos at the time; as such a case has to be presented within 48 hours for it to be eligible to go before the court.

The prosecutor was very interested in the case and agreed on the charges we had earlier discussed with our team:

On Saturday April 4th, the case was presented before the judge. The sheer number of police officials present showed the seriousness in which the case was being handled. The illegal fishermen started to look less confident. After the charges were read, the defense lawyer pleaded they were just poor fishermen who were fishing outside the Marine Reserve and accidently drifted in. This is a much-used argument, which is often believed by officials. However, in that part of the Galapagos Marine Reserve the currents actually run away from the islands. This argument made their defense very weak and the judge in a historic ruling ordered the fishermen to be incarcerated pending the investigation. The investigation can take up to 89 days, which the fishermen will be spending in the holding cell on Santa Cruz. If convicted, they face between 3 months and 3 years in jail for violating the Galapagos law and 15 days to 3 months for the use of illegal fishing gear.

Bail will only be set after the prosecutor has a chance to examine the case, which can take up to a week. Should bail be posted and the accused jump bail, their boats will be held indefinitely.

The case is so unique that on Wednesday April 8th, the Environmental Police gave a press conference. Several National TV stations were present as well as written press.

In the 9 years that Ecuador has had environmental laws, only in two other cases did the accused end up going to jail. In Galapagos, nobody has ever gone to jail. There were two cases were the accused were actually sentenced to jail time but they managed to leave the islands before the charges were finalized.

This case is therefore of the utmost importance as it will set a precedence and will also give a clear message to the poachers from Manta that things are changing in the Galapagos. 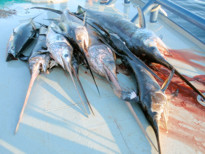 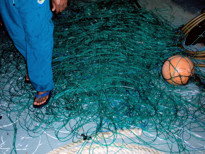 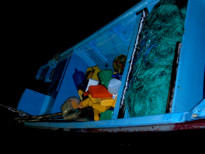 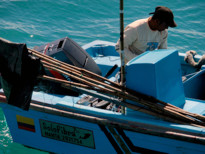 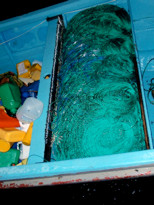 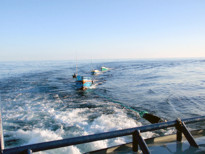