Report from the Streets of L.A. on the Demonstration for the Seals

Report from the Streets of L.A. on the Demonstration for the Seals 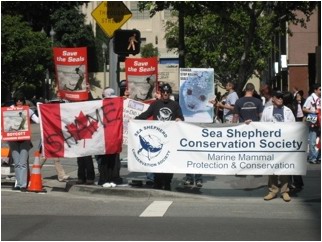 First of all, a big thank-you to all of you who took the time to protest before Canadian Consulates around the world on March 15th.

We had a terrific showing on six continents. People were on the streets in Africa, Asia, Australia, New Zealand, Europe, and South and North America.

The Government of Canada chose the same day of the Ides of March to announce that the kill quota would be 325,000 seal pups - 5,000 more than last year.

In Cape Town, South Africa, the crew of the Farley Mowat demonstrated and were accompanied by Sea Shepherd Advisory Board member Rutger Hauer who was in town working on a movie. 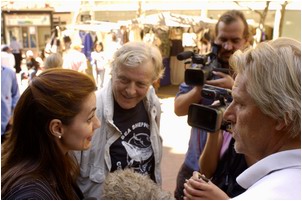 I attended the noon to 4:00 P.M. demonstration in Los Angeles along with dozens of Sea Shepherd members and representatives from harpseals.org, Vegan Vixens, and the Humane Society of the United States.

Also in attendance were about 30 LAPD officers, agents from the U.S. State Department, and Special Agents of the F.B.I. An undercover Mountie or two was probably lurking in the background. 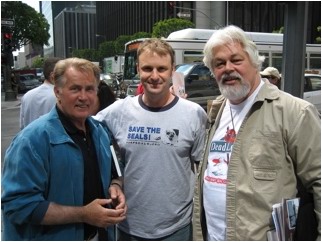 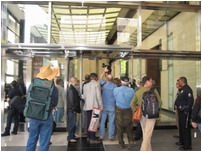 The Canadian Consul General Alain Dudoit agreed to meet with Sea Shepherd Advisory Board member Martin Sheen, Sea Shepherd member Dan Haggerty (Grizzly Adams - see picture below), harpseals.org founder Ian Robichaud, and myself on the 9th floor of the building at 550 Hope Street where the Canadian Consulate is located.

Journalists and all cameras were banned from the meeting. Martin Sheen, however, was able to stop the Deputy Consul Jim Feir at the door of the lobby and engage him in a discussion as to why cameras were being prohibited. As a result Deputy Consul had to refuse on camera to answer questions.

It was a predictable meeting. Dudoit admitted that he had never been to the seal slaughter but stated that it was humane and well managed. When I told him that we have evidence of hundreds of acts of cruelty to seals and that I personally had witnessed this cruelty, he replied that this could not be true because he was "in possession of the facts."

According to Dudoit, who simply parroted the "facts" from the Department of Fisheries and Oceans, there is no cruelty at all - not a single case. The hunt is well managed, well regulated, and the entire protest campaign has been organized for the purpose of victimizing poor fishermen who depend upon the annual slaughter of seals to survive.

The Canadian government has decided to dig the trenches and to settle in for a long fight.

All of the organizations opposed to the slaughter of seals must now cooperate to escalate the international boycott of Canadian seafood products. Dan Haggerty suggested to the Consul General that perhaps a boycott from the film industry may be needed.

After the meeting with the Consul General, we spoke to reporters and to supporters on the sidewalk in front of the building. 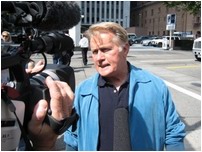 Martin Sheen energized the crowd when he said, "Some may think that this is a losing cause. But the only causes really worth supporting are lost causes." 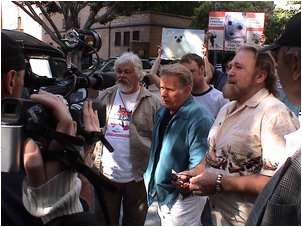 The objective, of course, is to win this lost cause and thanks to Martin Sheen, Dan Haggerty, Brigitte Bardot, Richard Dean Anderson, Paul and Heather McCartney, and hundreds of thousands of people around the world who care about the seals, we can win this cause. We can stop this horrific massacre of baby seals and we can do Canada a service by removing this despicable obscenity and national disgrace from being associated with Canadians.

The fight continues, out on the ice fields, in the courts, in the marketplace, on the streets, and over the airwaves.