Report from the International Whaling Commission

The island of Jersey, famous for its cows and potatoes, is this year’s host for the 63rd annual meeting of the IWC. Jersey is a beautiful island with friendly people; a very fitting place for this year’s meeting where Great Britain has made it clear that the corruption within the IWC must be exposed and dealt with. One of the changes proposed by Great Britain is to put an end to the practice of small nations showing up and paying their IWC dues with cash (delivered to them by the Japanese delegation in exchange for their vote for whaling).

The British proposal was originally proposed by 23 members of the European Union, only to be vetoed by Denmark, and thus could not be presented as an EU initiative. When it comes to killing whales, Denmark is the only place where the rotten smell of dying whales continues to sour the conscience of Europe. Denmark continues to support and encourage bribery and corruption within the IWC along with their partners in unethical procedures namely Japan, Iceland, and Norway!

The other surprising and upsetting development at the IWC is the embarrassing behavior of Monica Medina, the U.S. whaling commissioner, the first representative from the U.S. to have betrayed the whales since the implementation of the moratorium on whaling was imposed in 1987. Despite promises from President Barack Obama, his administration has been in discussion with Japan about legalizing whaling. Medina even promised Japan that the U.S. government would remove Sea Shepherd’s non-profit tax status at Japan’s request. She was obviously unaware that it is illegal for the U.S. government to use the IRS as a weapon against an American non-profit organization at the request of a foreign nation.

If Wikileaks hadn’t released the documents containing these facts to the media last year, we probably would never have never known about all of this backroom dealing. Due to the release of this information, we also discovered that last year the U.S. and New Zealand (with support from organizations like Greenpeace) attempted to broker a compromise that would have legalized whaling in the Southern Ocean Whale Sanctuary in return for a reduction in the kill quota. Sea Shepherd had already reduced the kill quota by at least half by us, and this last year by nearly 85 percent, but this achievement was ignored. Fortunately, thanks to the EU, Latin American nations, and Australia the compromise deal was struck down, embarrassing the USA who promised they would drop the compromise proposal although they appear to be trying to introduce it under another name and description with another joint New Zealand/U.S. proposal.

The people of New Zealand are generally unhappy with the sell-out of the whales by their government but it appears that the politicians in power in Auckland are more loyal to Tokyo than to Aotearoa. 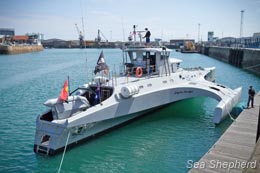 The Brigitte Bardot docked at Jersey.
Photo: Dan Marsh One thing for certain is that the U.S. has abandoned its long-term commitment to defending and protecting the great whales in favor of appeasing the Japanese government. President George H. W. Bush gave us the Hawaiian Marine Sanctuary and President Barack Obama gave us, well – a betrayal. Needless to say, I won’t be voting for Obama again. I had high hopes in 2008 for his new administration but all hopes for Obama have been abandoned as we prepare to enter the election year of 2012.

Another interesting development is that many of the Japanese puppet nations have not paid their IWC dues this year, primarily because Japan has been having a host of troubles recovering from the triple whammy of earthquake, tsunami, and nuclear reactor meltdown. This has left a few of their sycophantic supporters arriving at the party without their annual allowance. And no money means no voting, so Japan, Norway, Iceland, and Denmark will have their pro-killing stance severely weakened by a shortage of opportunistic voting nations.

Japan is coming to this meeting hoping to trade-in worldwide sympathy for their plight in exchange for permission to kill more whales, and they are once again placing their proposal on the IWC agenda to have the U.S., Australia, and the Netherlands outlaw Sea Shepherd in their territories and to strip us of our registration and flags.

I delivered a letter to Dr. Simon Brockington, Secretary of the IWC, earlier today requesting permission for Sea Shepherd to be allowed to attend the IWC meeting so that we can defend ourselves from Japanese accusations. But most likely that will not be allowed, and Sea Shepherd will continue to be the only organization banished from attending.

I guess we should be proud of this fact. There is no other organization that saves more whales than Sea Shepherd. If the price of our aggressive and highly effective interventions is to be barred from attending the boring and unproductive political meetings of the IWC – so be it. However, without our attendance, the proposals by Japan before the IWC to condemn Sea Shepherd amount to a kangaroo court where we, the accused, are denied the opportunity to defend ourselves from the allegations from the whale killers.

However, the primary reason that Sea Shepherd is in Jersey is to see if Japan intends to return to the Southern Ocean in December to resume their illegal slaughter of whales. If so, Sea Shepherd will also return and will once again intercept and block their operations. If they return, we will launch Operation Divine Wind, and our vessels the Bob Barker, the Steve Irwin, and the Brigitte Bardot will soon return to the remote and stormy seas of the Southern Ocean Whale Sanctuary to do what we do best – defend the whales!

Sea Shepherd’s letter to the Secretary of the International Whaling Commission:

To: Dr. Simon Brockington
Secretary of the International Whaling Commission

The Sea Shepherd Conservation Society has been banned from attending the IWC meetings as a nongovernment organization for 24 years since 1987.

I respectfully submit that to continue to disallow the Sea Shepherd Conservation Society observer status is unfair considering that proposals have been put forward by Japan concerning our organization and the Sea Shepherd Conservation Society has not, and is, not being allowed to present our documentation and position to rebut the accusations of the Japanese whalers.

The Japanese delegation has intentionally included the Sea Shepherd Conservation Society in the agenda. The Japanese delegation has been lobbying delegates from other nations to take actions against Sea Shepherd. Should we not be allowed to present the facts, evidence and documentation to defend our position in response to these false allegations?

The Sea Shepherd ships, officers and crews do engage in aggressive non-violent intervention against illegal Japanese whaling activities. However none of our actions have caused bodily harm to any person, nor have we been charged with any criminal offense in relation to our activities. Before being condemned by the IWC for activities that do not cause injury and do not fall outside of the law, should we not have the opportunity for a representative to speak on our behalf.

The Sea Shepherd Conservation Society is not a protest organization so our involvement with reference to the IWC meeting is strictly to observe. Our organization has never disrupted an IWC meeting or intentionally caused any disturbance at any IWC meeting since we first attended officially in 1980 and since we have officially not been allowed to attend since 1987. Sea Shepherd activism is restricted to high seas interventions against unlawful whaling practices in accordance with the principles of the United Nations World Charter for Nature.

We realize that Japanese, Icelandic and Norwegian whaling interests have made it clear that a Sea Shepherd presence is not welcome at the IWC. I would respectfully submit however that they have specific concerns in doing so, primarily the fact that some of their activities are clearly suspect and we have been in a position to witness this and thus our testimony holds the potential to embarrass such interests.

The Sea Shepherd Conservation Society reaches an audience of millions of people worldwide with our television program Whale Wars. We are very much involved with international whale conservation efforts and we believe our views would be a benefit to delegates wishing to better understand the conflict between whaling and conservation issues, especially in the Southern Ocean Whale Sanctuary.

Therefore Mr. Secretary, I would like to officially request that the Sea Shepherd Conservation Society be allowed to once again participate as a NGO observer to the International Whaling Commission. 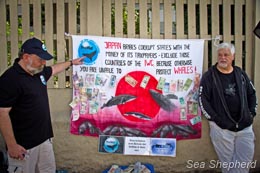