In South Africa, the shark nets are installed in tiered patterns by the KwaZulu-Natal Sharks Board (KZNSB). Just beneath the surface, they do not fully extend to either the top or the bottom and do not even come close to fully enclosing the beach areas. The result is that sharks can easily swim around or under the nets and into the shallow waters in which humans swim and surf. In fact, the KZNSB acknowledges on its own website that at least 33% of the sharks killed in these nets were actually on their way OUT from the beaches, rather than on their way in, and other sources estimate that this number is closer to 70%.

You see, the goal is not to provide a physical barrier to keep sharks away from the beaches, but rather to control shark populations by culling them. In many cases, the KZNSB places baited drumlines just outside the shark nets, which are designed to attract sharks in towards the beaches and kill them, either by biting the baited hooks on the drumlines or by entanglement in the nearby gill nets.

The process is entirely unselective, with nets installed all along the coast, including in Marine Protected Areas! The sole purpose of these nets is to kill all sharks in the area, including highly endangered species that would otherwise enjoy stringent legal protection, such as whale sharks and the great white shark. According to the KZNSB's own website, "The Marine Living Resources Act (Act 18 of 1998) controls the exploitation of marine plants and animals in South African waters. . . . The great white shark is totally protected; in 1991 South Africa being the first country in the world to do so." And yet, the KZNSB, which is governed by the KZN Department of Arts, Culture and Tourism, is exempted from these important conservation regulations in the interest of making tourists feel safe.

Sea Shepherd's Director of Shark Conservation, Kim McCoy, a founding member of the Shark Angels alliance, was outraged to witness first-hand the carnage caused by South African shark nets. "Sharks and other animals don't stand a chance against these nets," said McCoy. "They are brutal, indiscriminate killers designed to systematically cull a species for no other reason than to boost tourism by giving beachgoers a false sense of security against a severely sensationalized threat."

Shark Angels co-founder, Julie Andersen, who frequently leads groups of people on diving trips with the tiger sharks of Aliwal Shoal, clearly illustrates the irony of using shark nets to increase tourism, noting the number of tourists who come to South Africa each year specifically to dive with sharks. "Sharks in South Africa contribute a significant amount of revenue to the South African economy and provide countless jobs," said Andersen. "Live sharks mean tourists, jobs, and money. And that is recurring income-not the one-time income generated when a shark is killed." 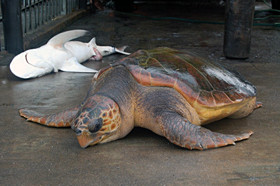 In addition to the countless deaths of sharks and other species caused directly by the shark nets, their impact on our collective psyches is damaging to shark conservation efforts worldwide. The very existence of shark nets perpetuates the myth that sharks are bloodthirsty man-eaters, and that humans require some form of protection from them. The installation of shark nets reinforces our misguided and often irrational fears of sharks by legitimizing these concerns as valid. This in turn fuels the biggest issue faced in shark conservation: the public's apathy, or even loathing, towards sharks.

It could be said there was once a time and a place for shark nets. Perhaps decades ago, when the public knew little about sharks, the fear of shark attacks was running high, and shark populations were far healthier than they are today. The practice of installing shark nets in South Africa began in 1952, when little was known about sharks, and humans had yet to spend the next 50+ years ravaging our oceans, causing irreparable damage and the collapse of species after species. The public wanted "protection" from sharks, and shark nets served this purpose.

But since then, shark fishing has skyrocketed, eliminating a large percentage of the world's shark populations, and the public has been exposed to much information about the importance of biodiversity conservation and the true nature of shark behavior towards humans. In recent years, it has been proven that a variety of non-lethal shark deterrents, such as the Shark Spotters program funded by private donations and the City of Cape Town, can be equally effective, and that animals need not be killed to allow for peaceful coexistence in their domain. The need for shark conservation is now a well-established fact, as is the fact these animals are significantly misunderstood, with the actual risk of an unpleasant shark encounter infinitesimal.

Shark nets are an unnecessary and outdated practice designed to address an issue that could easily be tackled in a non-lethal way, and they blemish South Africa's image as a world leader in conservation. It is time for a change. It is time to get these shark nets out of the water, once and for all.

• Join the campaign to remove the nets! Make your voice heard. Please sign our petition against the nets and encourage everyone you know to do the same.

• Read an article from Africa Geographic magazine in which Save Our Seas Foundation's Chief Photographer, Thomas P. Peschak, discusses the KZNSB shark nets: